Running the world on renewable energy.

“If you listen to the fossil fuel cheerleaders, the possibility is more remote than ever. Earlier this month, a few oil and natural gas fracking boosters in the EU derided the high cost of energy in Europe. They claimed that shifting to a policy of climate and groundwater threatening fracking could free them from both energy price shock and dependence on threatening overseas powers like Russia. 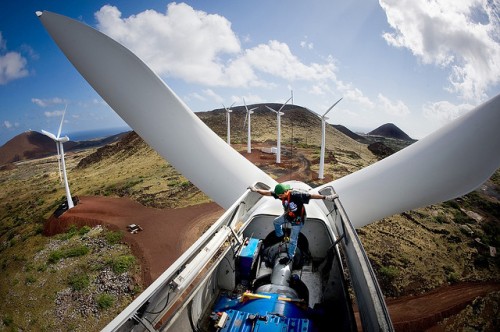 (GE wind turbine with battery backup in the turbine housing stores power for times of peak demand or when the wind is not blowing. Image source: Smart Planet.)

“Unfortunately, such, unattached-to-reality, fossil fuel boosting by former industry professionals turned politician isn’t new. For these wayward ministers had missed recent developments in nearby Denmark providing a real long-term solution to both high energy prices and dependence on foreign suppliers, and all without the added hassle of threatening Europe’s water supplies or pushing the world one step closer to climate change game over.

Cheaper Than Other Forms of Energy

For according to a recent report from the government of Denmark, new wind power coming online in 2016 will cost half that of energy now provided from current coal and natural gas based power plants. The net price would be equal to 5.4 cents (US) per kilowatt hour.

Rasmus Petersen, Danish Minister for Energy, Climate and Buildings was far more sanguine than a number of his wayward peers regarding renewable’s prospects:

“Wind power today is cheaper than other forms of energy, not least because of a big commitment and professionalism in the field. This is true both for researchers, companies and politicians.”

“We need a long-term and stable energy policy to ensure that renewable energy, both today and in the future is the obvious choice.”