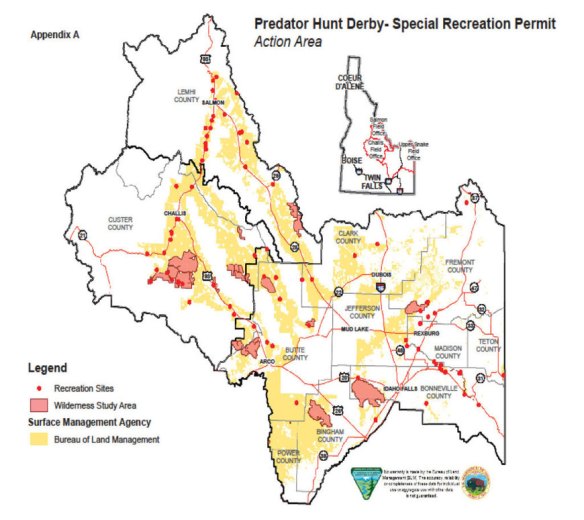 “The BLM is asking for comments on an Environmental Assessment that examines the impacts of issuing a Special Recreation Permit (SRP) to conduct a predator killing contest on BLM lands. The comment period begins today and remains open for 15 days, until Friday, October 16, 2014.

“If the SRP is issued, the killing contest is scheduled to take place from January 2-4, 2015 and would include prizes for killing a variety of species from wolves, coyotes, weasels, skunks, jackrabbits, raccoons, and starlings. Last year the contestants killed 21 coyotes and at least one badger. The permit would allow the contest to take place on BLM lands in a large portion of eastern Idaho.”

GR:  Please send a comment to the BLM.  Instead of killing predators, we should be tending to the habitats that their prey need.  With more than half of Earth’s vertebrates wiped out by humans since 1970 (report by World Wildlife Fund), it is past time to begin conserving wildlife species, not killing them for fun.