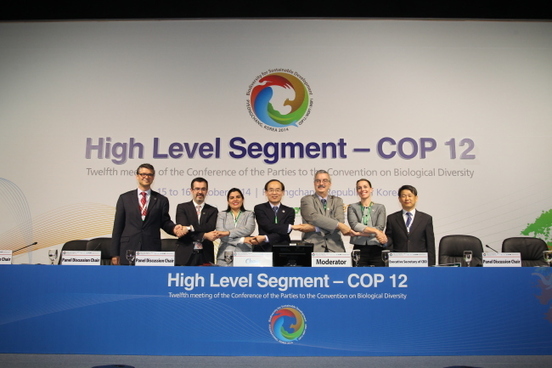 PYEONGCHANG, Gangwon Province ― The 12th meeting of members of the Convention of Biological Diversity closed Friday with the global community showing its commitment to increasing funding significantly to achieve conservation targets.The members…

GR:  Around 25,000 participants and observers from 164 countries agreed to ask the UN to emphasize biodiversity as an essential component of sustainable development. Then everyone shut their eyes, patted herself or himself on the back, and went home to continue business as usual:  Growth.

Half a century ago, Garrett Hardin commented that “sustainable growth” is an oxymoron. The participants in the CBD should be reading Hardin. Here’s a quote from a tribute to Hardin by John Cairns (2004:  http://bit.ly/1wfC8Ii) that relates to one of the CBD’s recommendations (the biobridge).

“He (Hardin) was a strong supporter of and commentator on Kenneth Boulding’s dismal and utterly dismal theories of economics. The dismal theory states that, if the only check on the growth of population is starvation and misery, then no matter how favorable the environment or how advanced the technology, the population will grow until it is miserable and starves. The utterly dismal theory states that, if the only check on population growth is starvation and misery, then any technological improvement will have the ultimate effect of increasing the sum of human misery since it permits a larger population to live in precisely the same state of misery and starvation as before the change. Although Boulding first proposed both these theories in 1956 and Hardin reinforced them in 1968, the dangerous expectation still exists that a technological solution can be found to every problem.”