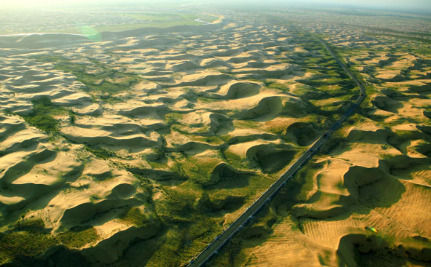 “Unlike the Great Wall of China, a 5,000-mile fortification dating back to the 7th century BC that separates northern China from the Mongolian steppe, the Great Green Wall of China-otherwise known as the Three-North Shelter Forest Program-is the biggest tree planting project on the planet. Its goal is to create a 2,800-mile long green belt to hold back the quickly expanding Gobi Desert and sequester millions of tons of carbon dioxide in the process. If all goes according to plan, the completion of the Green Wall by 2050 will increase forest cover across China from five to 15 percent overall.

“The Chinese government first conceived of the Green Wall project in the late 1970s to combat desertification along the country’s vast northwest rim. Soon thereafter, China’s top legislative body passed a resolution requiring every citizen over the age of 11 to plant at least three Poplar, Eucalyptus, Larch and other saplings every year to reinforce official reforestation efforts.

“But despite progress-according to the United Nations’ most recent Global Forest Resources Assessment, China increased its overall forest cover by 11,500 square miles (an area the size of Massachusetts) between 2000 and 2010, with ordinary citizens alone planting upwards of 60 billion trees-the situation is only getting worse. Analysts think China loses just as many square miles of grasslands and farms to desertification every year, so reforestation has proven to be an uphill battle. The encroaching Gobi has swallowed up entire villages and small cities and continues to cause air pollution problems in Beijing and elsewhere while racking up some $50 billion a year in economic losses. And tens of millions of environmental refugees are looking for new homes in other parts of China and beyond in what makes America’s Dust Bowl of the 1930s look trivial in comparison.”  Source: www.healthnewsdigest.com

GR:  A little reading in this article and its references quickly reveals that despite China’s massive commitment to reforestation, desertification is increasing.  Part of the problem is that the land-use practices that led to vegetation loss and soil instability are continuing.  Another part of the problem is that Chinese planners are making the same mistakes made in the U. S. and in other arid regions where managers used nonnative plants to replace depleted natives.

Many of you will be nodding and thinking that whenever land-use managers focus on Human benefits, they lose sight of the need for complete ecosystem health. They focus on potential benefits from foreign species that appear to be suited to growth on degraded lands.  Their goal is to continue profitable logging, livestock grazing, and water diversion.  Therefore, the desert grows.

Thanks to Professor Willem Van Cotthem for his efforts to provide a single Internet source for work on desertification (https://desertification.wordpress.com).