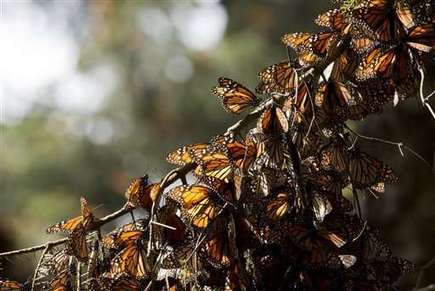 In this Jan. 4, 2015 file photo, a kaleidoscope of Monarch butterflies hang from a tree branch, in the Piedra Herrada sanctuary, near Valle de Bravo, Mexico. Illegal logging has almost tripled in the monarch butterfly’s wintering grounds in …more.

“Almost all of the loss occurred in just one rural hamlet in the state of Michoacan. Loggers cut down 47 acres (19 hectares) of trees in San Felipe de los Alzati since last year’s gathering of butterflies. A total of 52 acres (21 hectares) of forest in the reserve were lost overall, including losses due to drought or pests.”

That’s the highest figure since 2009, well above the 20 acres (8 hectares) lost in 2014, according to the announcement by the World Wildlife fund and the Institute of Biology of Mexico’s National Autonomous University. The 2014 loss was about 12 acres (5 hectares) due to logging and 8 acres (3 hectares) to drought.

Sourced through Scoop.it from: phys.org