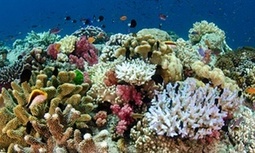 “The word “biodiversity” is employed once in the Paris agreement’s 32 pages. “Forests” appears a few times, but “oceans”, like biodiversity, scores just a single appearance. There is no mention of extinction. Wildlife, coral reefs, birds, frogs, orchids, polar bears and pikas never show up anywhere in the document.

“This is hardly surprising: the landmark agreement in Paris – the boldest yet to tackle climate change (which is saying something, but not nearly enough) – was contrived by one species for the benefit of one species. It was never meant to directly address the undeniable impacts of global warming on the world’s eight million or so other species – most of them still unnamed. But many experts say this doesn’t mean biodiversity won’t benefit from the agreement – especially if the 196 participants actually follow through on their pledges and up their ambition quickly.”  From: www.theguardian.com

GR:  Noncommercial wildlife, wildlife habitat, and soils are suffering from neglect and outright exploitation while under the care of our farmers, ranchers, governments, and land-use agencies.  It’s sad that nature has no way to protect itself from an egocentric species like ours.

2 thoughts on “What does the Paris agreement mean for the world’s other 8 million species?”