We are not meeting a fundamental requirement for nature conservation.  Simple repeated inventories of what is and what is not present is the first step toward preserving balanced ecosystems.  We have very few.  We can’t act to control invasive species or work to maintain native species when we don’t know where they are, and we don’t know how their numbers are changing.

We focus too much of our energy and resources on inventories made from satellites.  Remote sensing that cannot identify species of plants and is totally blind to animal presence has very little value compared to what observers can record during on-the-ground surveys. 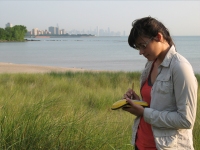 So what can we do?  We can call for citizen-naturalist volunteers to take pencil and paper outdoors and record what they see.  A few weeks training can prepare most people to make useful observations.  For an example of the value of such work, look at the Audubon Society’s Christmas Bird counts.

Here’s an article that discusses the lack of information on species distribution.

Gaps in our information about biodiversity means we are at risk of focussing our conservation efforts in the wrong places.

“New research from Newcastle University, UK, University College London (UCL) and the University of Queensland, Australia, highlights the uncertainty around our global biodiversity data because of the way we record species sightings.

Publishing their findings today in the academic journal Biology Letters, the team say we need to change the way we record sightings — or a lack of them — so we can better prioritise our conservation efforts in light of the Convention on Biological Diversity.

“Dr Phil McGowan, one of the study’s authors and a Senior Lecturer in Biodiversity and Conservation at Newcastle University, said:

“Where there is no recent biodiversity data from an area then we might assume a species is no longer found there, but there could be a number of other possible reasons for this lack of data.

“It could be that its habitat is inaccessible — either geographically or due to human activity such as ongoing conflict — or perhaps it’s simply a case that no-one has been looking for it.

“Unless we know where people have looked for a particular species and not found it then we can’t be confident that it’s not there.”

“To test the research, the team used the rigorously compiled database of European and Asian Galliformes — a group of birds which includes the pheasant, grouse and quail.

“Our long-standing love of the Galliformes goes back hundreds of years which means we have records that are likely to be much better than for other groups of animals or plants,” explains Dr McGowan.

“Not only have these birds been hunted for food, but their spectacular colours made them valuable as trophies and to stock the private aviaries of the wealthy. In the late 1800s and the turn of the last century, the Galliformes were prized specimens in museum and private collections and today they are still a favourite with bird watchers.”

2 thoughts on “Nature Conservation Is Impossible Without Field Inventories”