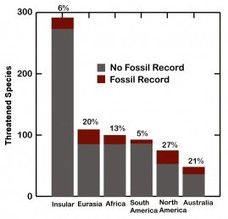 “There are species going extinct today that have never been described,” Plotnick said. “Others are going extinct that are known only because someone wrote it down.” All such species would thus be unknown in the far future, he said, if the written historical record is lost — as it might well be.

The fossil record, Plotnick points out, is much more durable than any human record.

“As humanity has evolved, our methods of recording information have become ever more ephemeral,” he said. “Clay tablets last longer than books. And who today can read an 8-inch floppy?” he shrugged. “If we put everything on electronic media, will those records exist in a million years? The fossils will.”

Other authors on the study, published earlier this month in Ecology Letters, are Felisa A. Smith of the University of New Mexico and S. Kathleen Lyons of the National Museum of Natural History in Washington, D.C.

GR:  We are the cause of the current mass extinction, and most of us simply don’t care.  The research reported here shows that there will be no permanent record of most of the species that existed during our time on Earth.  But, of course, we don’t care.