GR.–It’s difficult to think of a response to this.  Apparently humanities love of ivory is stronger than its love of elephants.

Oliver Milman, Guardian:  New study finds poaching has helped shrink population by 60% since 2002 – and eventually may be responsible for eradicating one of the largest creatures left. 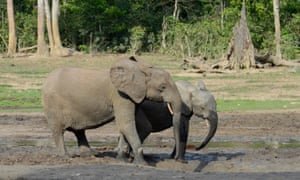 African forest elephants: research indicates their rate of population growth is about three times slower than their savannah cousins.

The first comprehensive research into forest elephant demographics found that even if poaching was curbed, it will take nearly 100 years for the species just to recover the losses suffered in the past decade. The forest elephant population has crashed by more than 60% since 2002, with the species now inhabiting less than a quarter of its potential range of the Congo basin in Africa.  Source: African forest elephants may face extinction sooner than thought: study