GR:  I caught only one mention by Clinton. The moderators and the candidates know that Americans are too slow-witted to recognize the omission of one of the most critical issues of our time.  That leaves them the option to remain friendly with the fossil fuel industry and get some nice contributions.

Robert Scribbler:  “115,000 — that’s about how many years back into Earth’s past we’d likely have to go to find one that was hotter than 2016 globally. 0 — that’s the number of Presidential debate questions that raised the issue of human-caused climate change during this critical election year.

“What do we call this? According to David Leonhardt at The New York Times, it’s a complete failure of journalism.

“In a year in which the very existence of the 25 million year old Great Barrier Reef was threatened by climate change, at a time during which climate change has brought more droughts, fires, floods, extreme weather events, sea ice losses, glacial melt, threats to global security, and negative impacts to ocean health than at any time in human history, and during a period in which the formation of dangerous entities like ISIS and the generation of mass waves of refugees now crossing the world are being spurred by droughts and floods and losses to food and water security related to climate change, you’d think that just one Presidential Debate question would have mentioned the subject.”  —robertscribbler 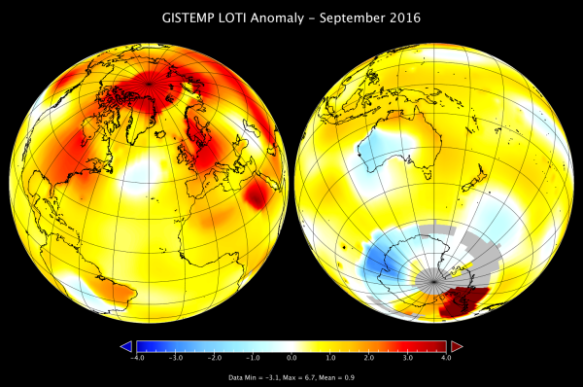 (According to NASA, September of 2016 was the hottest September in the 136 year climate record. This most recent record hot month occurred during a year in which global temperatures are fast approaching the dangerous 1.5 C climate threshold. Image source: NASA GISS.)