GR:  The Corr of Engineers did not send an eviction notice. The letter was merely trying to avoid liability.  There isn’t much new here, but we have to be pleased with news media that report on the issue. 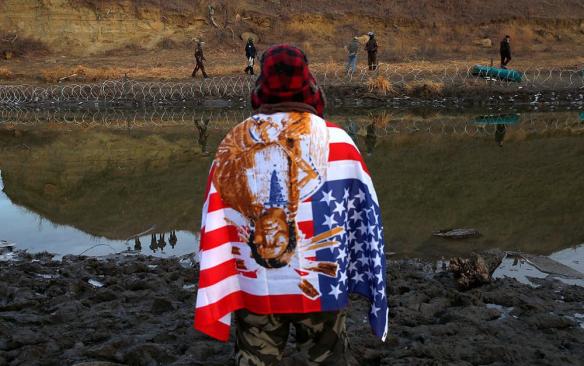 A protester near Standing Rock on November 25, 2016. Photo by Jessica Rinaldi/The Boston Globe via Getty Images

“Despite a government order to vacate, tribal leaders as well as demonstrators camped out in Standing Rock, North Dakota, say they are staying put.

“In a letter sent Friday to Dave Archambault II, chairman of the Standing Rock Sioux tribe, the Army Corps of Engineers said they will be closing a portion of the land north of the Cannonball River on December 5, and that anyone on that land will be “considered trespassing and may be subject to prosecution under federal, state and local laws.”

“It’s unclear if the Corps will take steps to arrest or remove people who stay. The Army Corps of Engineers did not respond to my request for comment. One thing’s for sure: It would take a major effort to remove the estimated 5,000 encamped to stop the construction of the Dakota Access Pipeline. (Update: The Corps released a statement late Sunday clarifying that they have “no plans for forcible removal.” Instead, they say, they are “seeking a peaceful and orderly transition to a safer location.” How exactly that would happen is unclear.)

“Our Tribe is deeply disappointed in this decision by the United States, but our resolve to protect our water is stronger than ever,” said Archambault in a statement. “We ask that all everyone who can appeal to President Obama and the Army Corps of Engineers to consider the future of our people and rescind all permits and deny the easement to cross the Missouri River just north of our Reservation and straight through our treaty lands.” –Cole Kazdin and Duy Linh Tu (continue reading:  The Standing Rock ‘Water Protectors’ Vow to Stay No Matter What the Government Does | VICE | United States)