GR:  Initiating a siege that blocks emergency vehicles and supplies from reaching people on tribal treaty lands is an obvious next step for a law enforcement system that sees itself as the defender of corporate rights. This is the strategy followed by dictators such as Bashar Hafez al-Assad the current President of Syria. Aid agencies have fought to deliver supplies to peaceful people in Syria and perhaps they can do so in North Dakota. 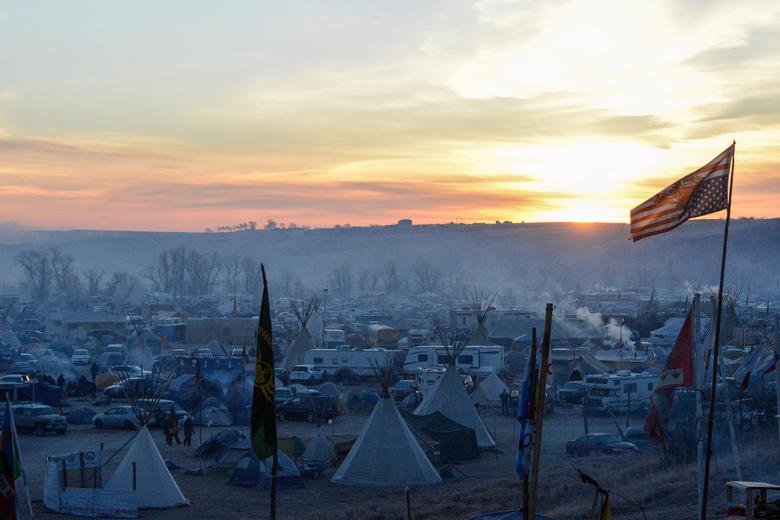 (Photo:  The Oceti Sakowin camp is seen at sunrise during a protest against plans to pass the Dakota Access pipeline near the Standing Rock Indian Reservation, near Cannon Ball, North Dakota, U.S. November 2, 2016. REUTERS/Stephanie Keith)

“North Dakota law enforcement will begin to block supplies from reaching protesters at a camp near the construction site of an oil pipeline project in an effort to force demonstrators to vacate the area, officials said on Tuesday.

“Activists have spent months protesting plans to route the $3.8 billion Dakota Access Pipeline beneath a lake near the Standing Rock Sioux reservation, saying the project poses a threat to water resources and sacred Native American sites.

“Supplies, including food and building materials, will be blocked from entering the main camp following Governor Jack Dalrymple’s signing of an “emergency evacuation” order on Monday, Maxine Herr, a spokeswoman from the Morton County Sheriff’s Department, said.

“The order was effective immediately. As of Tuesday morning, however, no vehicles carrying supplies had been turned back, said Cecily Fong, a spokeswoman for the North Dakota Department of Emergency Services.” —Reporting by Timothy Mclaughlin in Chicago; Editing by Matthew Lewis. Read more:  North Dakota to block supplies from pipeline protesters’ camp | Reuters