“Rampant road building has shattered the Earth’s land into 600,000 fragments, most of which are too tiny to support significant wildlife, a new study has revealed. 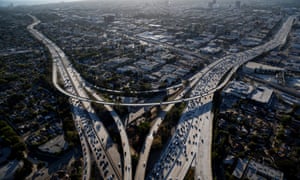 The length of the world’s roads is projected to increase by more than 60% by 2050, say researchers, but only 5% of roadless areas have any legal protection. Photograph: Patrick T. Fallon/Getty Images

“The researchers warn roadless areas are disappearing and that urgent action is needed to protect these last wildernesses, which help provide vital natural services to humanity such as clean water and air.

“The impact of roads extends far beyond the roads themselves, the scientists said, by enabling forest destruction, pollution, the splintering of animal populations and the introduction of deadly pests. New roads also pave the way to further exploitation by humans, such as poaching or mining, and new infrastructure.

A global map of the ecological value of roadless areas. The index values indicated in blue highlight areas that are especially large and well connected and/or notably rich in biodiversity. The red areas are completely roaded: covered by roads and 1km buffers alongside either sides of the road. Photograph: P Ibisch et al/Science

“An international team of researchers analysed open-access maps of 36m km of road and found that over half of the 600,000 fragments of land in between roads are very small – less than 1km2.” –Damian Carrington (More:  New map reveals shattering effect of roads on nature)