GR: Sad times if you care for wildlife. The researchers explain that Ring-Tailed Lemurs declined to this point with no outcry because no one was watching. Around the world at this crucial time for wildlife, there are too few scientists monitoring populations. “The two most prolific Lemur researchers, Alison Jolly and Robert Sussman, have died and we are the only descendants with active research in Madagascar,” said researcher Tara A. Clarke of the organization Lemur Love. 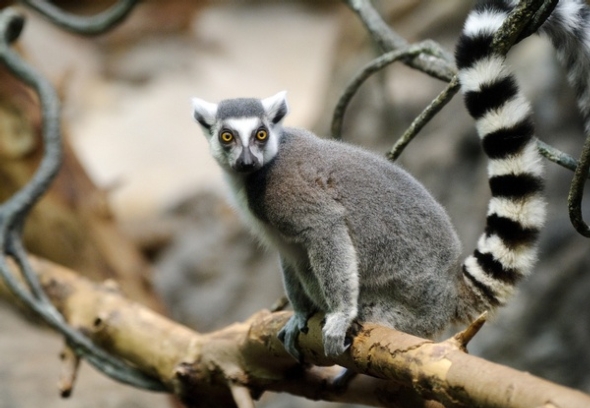 “Madagascar’s beloved ring-tailed lemurs (Lemur catta) have all but disappeared from many of the island nation’s forests. According to two worrying new studies, the species’ population has fallen to between 2,000 and 2,400 animals—a shocking 95 percent decrease since the year 2000.

“To put that number in context, there are now fewer ring-tailed lemurs living in the wild than there are living in zoos around the world.

“Factors driving the decline include rapid habitat loss, hunting, and the illegal pet trade, according to a paper published last month in the journal Primate Conservation and a second paper published today in Folia Primatologica.

“The situation is so bad that many ring-tailed lemur sub-populations now contain fewer than 30 individuals. In addition, the animals have completely disappeared from at least 15 sites they once called home.

“The now-empty forests are “very sad, quiet and dusty,” says Marni LaFleur, lead author of the second paper and a co-director of the conservation organization Lemur Love. “There was a thick layer of crunchy leaf litter on the ground, and dust on top. Some trees were heavy with ripe and rotten fruits. Without birds or mammals to consume them, the untouched fruits just rot in and around the trees. Normal aspects of a forest, which as a biologist I have a fairly keen eye for—footprints, scat, bite marks, sleeping spots, calls—are absent.” —John R. Platt