GR:  Southerly movement of cold air balances northerly movement of warm air. The added warmth is melting polar sea ice, increasing humidity, trapping more heat, and strengthening the incursions of warm air north and cold air south. We expect this positive feedback to grow stronger with each passing year. Periods of record winter freezes alternating with record winter warmth will allow earlier spring blooms and will more often freeze spring flowers. Crops will fail, migrating wildlife will be confused, and nature will lose another step in its battle to survive the onslaught of human impact.

“A surge of warm air and stormy weather has once again invaded the Arctic, sending temperatures soaring and stagnating winter sea ice growth. These repeated incursions have helped keep sea ice area at record low levels for much of the freeze season, and have even contributed to an exceptional cold season retreat. 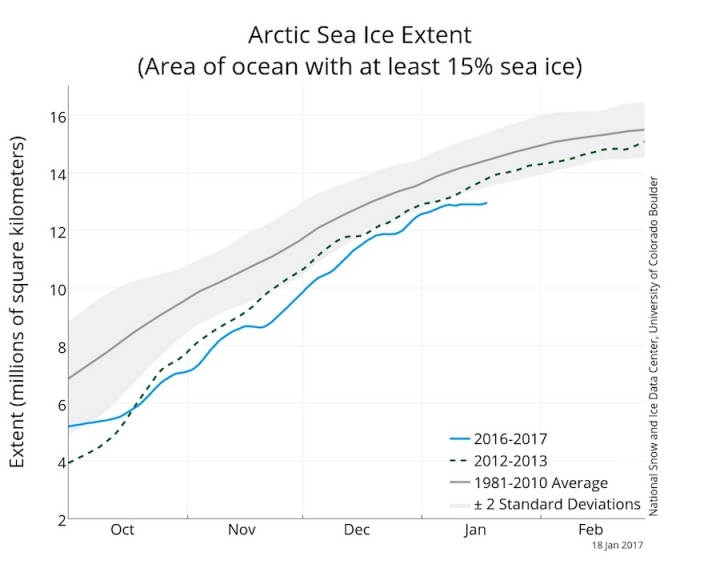 Sea ice area during the winter freeze-up (in blue) as compared to the long-term average (in gray). Periodic incursions of warm, stormy weather, along with persistent winter warmth, have kept sea ice at record low levels for much of the winter. Credit: NSIDC

“These recent record lows are part of a clear downward spiral of Arctic sea ice caused by regional temperature rise that is happening at twice the global pace, fueled by continued greenhouse gas emissions.2016, the hottest year on record for the planet, was something of an exclamation point on that Arctic trend, with seven months of record low sea ice levels, as well as record high air temperatures in the region.“

“2016 is the most anomalous year we have seen yet and it appears to be continuing,” Julienne Stroeve, of the U.S. National Snow & Ice Data Center and the University College London, said in an email. “This is not going to look good going into the melt season.”

“This decades-long decline in sea ice has repercussions for native communities and for the Arctic ecosystem, of which the sea ice is a vital component. It is also exposing the fragile region to more shipping and other commercial activity and could be altering weather patterns over parts of the Northern Hemisphere.” –Andrea Thompson (Continue reading:  Warm Air Invades Arctic Again, Slowing Sea Ice Growth | Climate Central.)