GR: Worth noting that even in developed countries with slowing population growth, wildlife decline continues. In Britain, many people do small things to make their gardens more wildlife friendly. However, habitat loss and farming continue to cut carrying capacity for most wildlife species. Hedgehog and other species’ declines are accelerating, suggesting that many wildlife populations are no longer self-sustaining and are falling toward extinction. The Guardian story below includes ideas and links for steps to take to support wildlife. Unfortunately, it does not mention the big step, human population control. Without drastic efforts to cut our needs and begin returning the land and seas to their natural state, most of Earth’s wildlife species will disappear (more on human population impact). 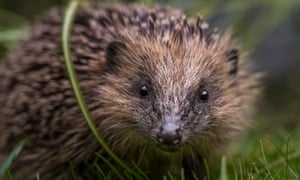 Britain’s hedgehog population has dropped from an estimated 30 million in the 1950s to fewer than one million today. Photograph: Rebecca Cole/Alamy

“The plight of the hedgehog in Britain appears to be worsening, with a new survey revealing a further decline in garden sightings.

“The spiky creature was once a common sight, with the population estimated at 30 million in the 1950s. But that has plummeted to fewer than one million today, with a third of this loss thought to have taken place in the past decade.

“The poll’s result is in line with an in-depth analysis in 2015 by the People’s Trust for Endangered Species which found urban populations of hedgehogs had fallen by up to a third since 2000 and rural populations had declined by at least a half. Results from a citizen science survey run by the RSPB in June 2016 also revealed a falling number of sightings.

“The decline is not entirely understood but the main factors are thought to be the loss of their habitat in Britain’s towns and countryside – where farming has intensified – as well as road deaths. The fragmentation of habitat is also a problem as hedgehogs roam up to a mile every night to look for food and mates. A possible rise in badger numbers, which can eat hedgehogs, has also been suggested as a possible cause.” –Damian Carrington (More: Hedgehogs now a rare garden sight as British populations continue to decline | Environment | The Guardian.)