GR:  Permafrost melt is accelerating as climatologists have predicted. However, there is yet no sign of a truly catastrophic release of methane. 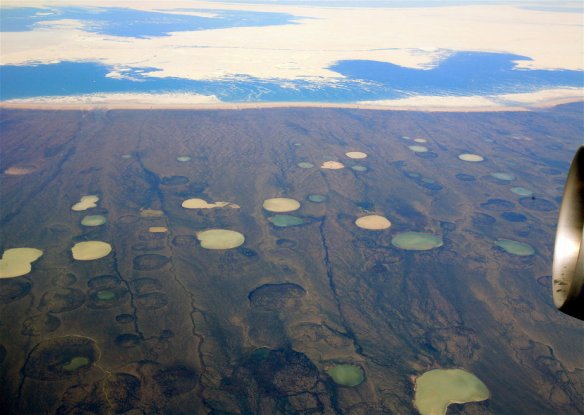 “Huge slabs of Arctic permafrost in northwest Canada are slumping and disintegrating, sending large amounts of carbon-rich mud and silt into streams and rivers. A new study that analyzed nearly a half-million square miles in northwest Canada found that this permafrost decay is affecting 52,000 square miles of that vast stretch of earth—an expanse the size of Alabama.

“According to researchers with the Northwest Territories Geological Survey, the permafrost collapse is intensifying and causing landslides into rivers and lakes that can choke off life downstream, all the way to where the rivers discharge into the Pacific Ocean.

“Similar large-scale landscape changes are evident across the Arctic including in Alaska, Siberia and Scandinavia, the researchers wrote in a paper published in the journal Geology in early February. The study didn’t address the issue of greenhouse gas releases from thawing permafrost. But its findings will help quantify the immense global scale of the thawing, which will contribute to more accurate estimates of carbon emissions.

“Permafrost is land that has been frozen stretching back to the last ice age, 10,000 years ago. As the Arctic warms at twice the global rate, the long-frozen soils thaw and decompose, releasing the trapped greenhouse gases into the air. Scientists estimate that the world’s permafrost holds twice as much carbon as the atmosphere.

“The new study was aimed at measuring the geographical scope of thawing permafrost in northwest Canada. Using satellite images and other data, the team studied the edge of the former Laurentide Ice Sheet, a vast expanse of ice that covered two-thirds of North America during the last ice age. The disintegration of the permafrost was visible in 40- to 60-mile wide swaths of terrain, showing that, “extensive landscapes remain poised for major climate-driven change.” –Bob Berwyn (Continue Reading:  Massive Permafrost Thaw Documented in Canada, Portends Huge Carbon Release | InsideClimate News.)