GR:  Peru is suffering through a series of global warming weather extremes. It would be interesting to get Humboldt’s response to what is happening now, 215 years after he visited Peru.

“During September through November, wildfires tore across parts of drought-stricken Peru.

“Peru’s Amazon was then experiencing its worst dry period in 20 years. And, at the time, over 100,000 acres of rainforest and farmland was consumed by flash fires. Rainforest species, ill-adapted to fires, were caught unawares. And a tragic tale of charred remains of protected species littering a once-lush, but now smoldering, wood spread in the wake of the odd blazes. 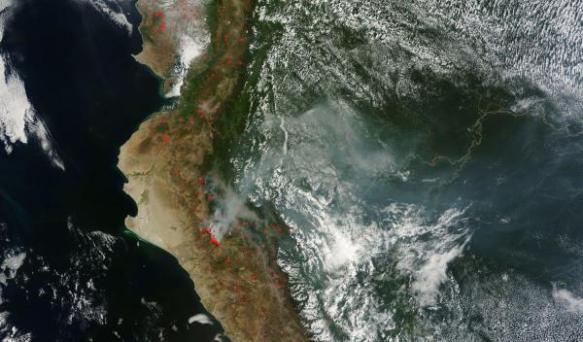 “At the time, scientists noted that the after-effects of El Nino had combined with a warmer world to help spur the drought and the fires. And they warned Peru to prepare for more extreme weather in the future as Earth continued to heat up.

“Fast forward to 2017 and we find that the moisture regime has taken a hard turn in Peru as the droughts and fires of 2016 gave way to torrential rains. Since January, more than 62 souls have been lost and about 12,000 homes destroyed as flash floods ripped through Peru. Over the past three days, the rains have been particularly intense — turning streets into roaring rivers and causing streams to over-top — devouring roads, bridges and buildings. As of yesterday, 176 districts within the country have declared a state of emergency due to flooding.” –Robert Scribbler (Continue reading:  Signals of Climate Change Visible as Record Fires Give Way to Massive Floods in Peru | robertscribbler.)