GR: Here are some additional comments on the expanded permafrost-melt findings I reported this morning. That study did not project the effect on global temperature. The article below is by respected climate scientist Joe Romm. Perceptions of the permafrost threat has waxed and waned over the past few years, but I think it has permanently waxed this time. There is one correction. I thought permafrost carbon would be released largely as methane. Romm says there will be a substantial amount of methane, but that most of the gas will be CO2. 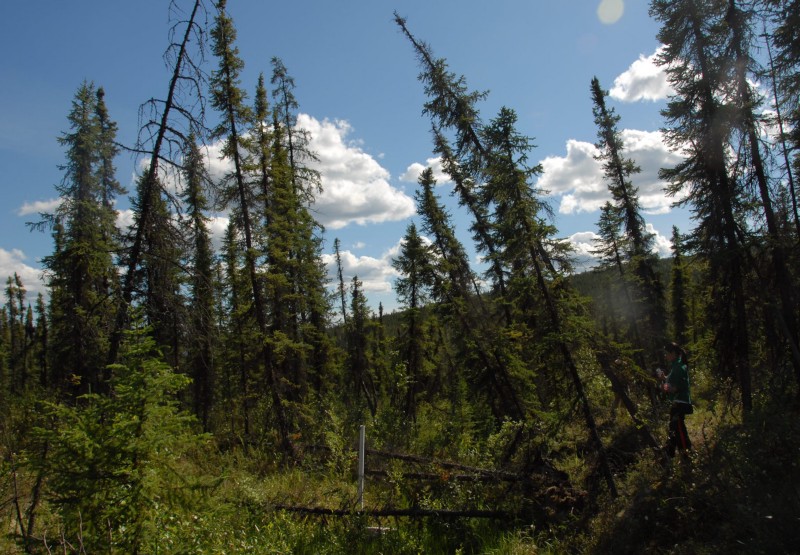 In this so-called “drunken forest,” in Alaska, the trees tilt because the once-frozen ground (permafrost) is thawing. CREDIT: NSIDC.

“Those GHGs would in turn warm the planet more, melting more permafrost, releasing more GHGs, and so on. This is perhaps the most dangerous amplifying carbon-cycle feedback humanity faces — considering permafrost contains twice as much carbon as the atmosphere does today.

“That’s why it’s so vital the U.S. adheres to its commitments in the 2015 Paris climate agreement — a landmark accord in which the world unanimously committed to keep ratcheting down carbon pollution to ensure total warming stays “well below 2°C [3.6°F] above pre-industrial levels.” And that’s why President Donald Trump’s efforts to undermine the deal are so dangerous, since they may put the permafrost — and hence our livable climate — across a point of no return.

“Trump’s executive order puts the world on the road to climate catastropheIt’s so egregious, it no longer really matters if he doesn’t formally opt out of the Paris climate deal.thinkprogress.org

“If we could limit total warming to the 1.5°C target identified in the Paris deal, that would save 800,000 square miles of permafrost compared to 2°C warming. But if the Trump administration succeeds in thwarting Paris, then we may lose more than half of the permafrost.” –Joe Romm (More: Earth’s melting permafrost threatens to unleash a dangerous climate feedback loop.)