GR: People have often tried to import species to solve problems or increase productivity. Many times, unintended consequences have proven disastrous as the imported species spread beyond the objective and replaced local plants and animals. [Here’s an example from my research.] The story below gives another example for a current problem. 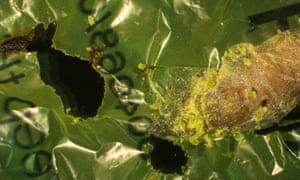 “Caterpillars that can munch up plastic bags have just been identified, fuelling excited speculation that this could one day eliminate global pollution from plastic waste. The chance discovery, initially made by a scientist and amateur beekeeper whose plastic bag had been eaten through by the moth caterpillars, was reported this week by researchers at Cambridge University and the Spanish National Research Council.

“How thoughtful of nature to provide bugs that eat our rubbish. Is this the end of landfill, turtles with plastic-congested stomachs, and trees adorned with tattered ribbons of shopping bags?

“Well, it’s never that simple, is it? Attempts to commandeer nature to do our dirty work never seem to turn out as hoped, whether these take the form of planting trees to soak up carbon dioxide, or introducing invasive species for pest control, or using microorganisms to clean up oil spills. Remember the Australian cane toad debacle? The toads were introduced in the 1930s to control crop pests but instead gorged themselves on other local wildlife and spread across the country.

“These creatures, the larvae of the greater wax moth (Galleria mellonella), can devour polyethylene, which along with the closely related polypropylene is the main type of plastic found in waste. But you’d need an awful lot of them to make a significant dent on the plastic waste problem. The UK alone discards almost 2m tonnes of this stuff every year. At the rate of consumption reported by the researchers – one worm gets through about two milligrams of plastic a day – you’d need billions of caterpillars eating constantly all year round to deal with that.

“Quite aside from how and where you’d farm all these bugs, there’s something about them that news reports have failed to mention. Wax moths, which are found throughout the world, are so-called because they eat wax. Specifically, they love to eat the wax from which bees make their honeycombs – and so they can devastate bee colonies. The two common species of wax moth, of which Galleria mellonella is one, are thought to cause more than £4m worth of damage annually in the United States alone.” –Philip Ball (Continue: Plastic-eating bugs? It’s a great story – but there’s a sting in the tail | Philip Ball | Opinion | The Guardian) 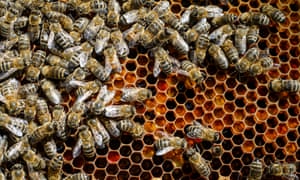 With bee populations already under severe stress, we might want to think twice about breeding one of their common airborne enemies in huge numbers. Photograph: Peter Komka/EPA