GR: Republican tools of homocentric businesses are hard at work opening the land to exploitation. What happened to us? Is this capitalism run wild, or is it something quite a bit simpler. Is the solution simply to outlaw money in politics (this link takes you to one of my posts on this subject)? Would that lead to strong nature conservation, pollution restrictions, single-payer health, financial regulation, restricted arms sales, fewer wars, and more?

Seven of California’s national monuments are under “review” as a result of President Trump’s executive order leveling an all-out assault on our public lands. 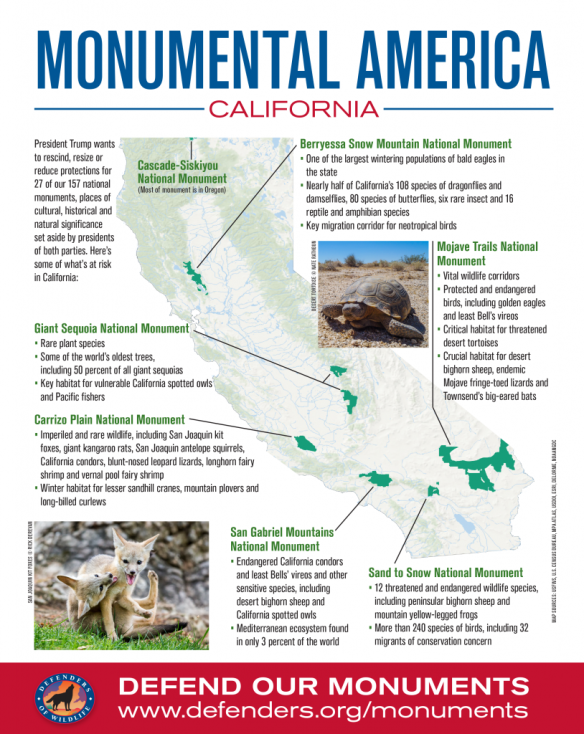 “In April, the Carrizo Plain National Monument, located in a remote area east of San Luis Obispo, California, erupted with wildflowers in an occasional event known as a “super bloom.” Bob Wick, with the Bureau of Land Management, wrote on the agency’s Flickr page that “(t)he Valley floor has endless expanses of yellows and purples from coreopsis, tidy tips and phacelia, with smaller patches of dozens of other species … (And) the Temblor Range is painted with swaths of orange, yellow and purple like something out of a storybook. I have never seen such a spectacular array of blooms. Ever.”

“The Carrizo Plain National Monument is one of seven California national monuments under review by the U.S. Department of the Interior to determine if they should remain as designated, or if their boundaries or management should be changed by the federal government. This unprecedented review, ordered by President Trump, affects 27 national monuments designated under the Antiquities Act of 1906.

“California’s seven national monuments under review are special places and must remain protected. These areas were designated after years of community-based organizing, extensive effort to detail the specific historical, cultural and ecological values that make these areas meet the strict criteria for monument designation, and broad public outreach efforts. These lands receive overwhelming public support from the local community and stakeholders. After monument designation, collaborative efforts continue with the monument management planning process involving all stakeholders, particularly the local communities around the monuments.

“In California, the president’s Executive Order affects seven national monuments—the most of any state with monuments under review. These seven monuments are widely supported by both Californians and most Americans. Many include lands sacred to Native American Tribes or capture historic locales celebrating our American legacy. Others provide invaluable cultural, scientific and recreational resources that provide immeasurable social, economic and ecosystem protection benefits to local communities. These monuments provide habitat for some of California’s most iconic wildlife, including the California condor, desert tortoise, and San Joaquin kit fox. They are places for both Americans and global visitors to reconnect with nature and recreate.” –Kim Delfino (California’s Monumental Distress – Defenders of Wildlife Blog)