GR: This is not news, but it is an important reminder. Scientists agree that even if we stopped emitting CO2 today, temperature would continue to rise. That’s because it takes years for the oceans to reach equilibrium with the new level of energy trapped in the lower atmosphere. However, we aren’t stopping today; we won’t stop for decades. Everyone needs to plan for at least a 4 degree C increase in average temperature before the end of the century.

“Earth’s climate is changing rapidly. We know this from billions of observations, documented in thousands of journal papers and texts and summarized every few years by the United Nations’ Intergovernmental Panel on Climate Change. The primary cause of that change is the release of carbon dioxide from burning coal, oil and natural gas.

“Earth has already, essentially, reached the 1℃ threshold. Despite the avoidance of millions of tons of carbon dioxide emissions through use of renewable energy, increased efficiency and conservation efforts, the rate of increase of carbon dioxide in the atmosphere remains high.

“International plans on how to deal with climate change are painstakingly difficult to cobble together and take decades to work out. Most climate scientists and negotiators were dismayed by President Trump’s announcement that the U.S. will withdraw from the Paris agreement.

“But setting aside the politics, how much warming are we already locked into? If we stop emitting greenhouse gases right now, why would the temperature continue to rise?

The carbon dioxide that accumulates in the atmosphere insulates the surface of the earth. It’s like a warming blanket that holds in heat. This energy increases the average temperature of the earth’s surface, heats the oceans and melts polar ice. As consequences, sea level rises and weather changes.” –Richard B. Rood (If We Stopped Emitting Greenhouse Gases Right Now, Would We Stop Climate Change?) 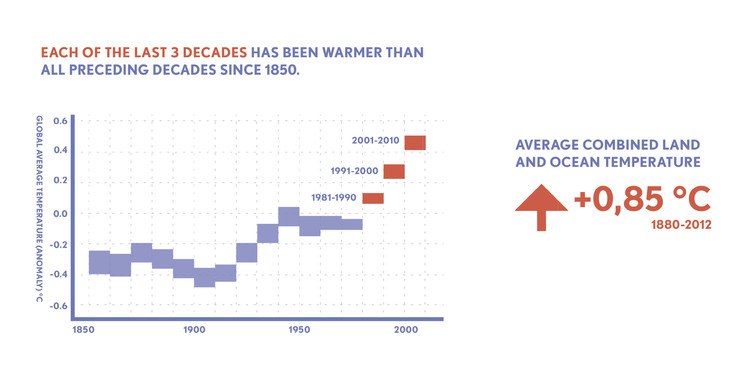 Global average temperature has increased. Anomalies are relative to the mean temperature of 1961-1990. Based on IPCC Assessment Report 5, Working Group 1 Finnish Meteorological Institute, the Finnish Ministry of the Environment, and Climateguide.fi

1 thought on “If We Stopped Emitting Greenhouse Gases Right Now, Would We Stop Climate Change?”