GR:  Invasive species are weakening and eliminating ecosystems around the world. In many instances, people introduced the invasives to increase food production for domestic livestock. In other instances, people introduce the invasives to control other invasives. The search for magic bullets such as pesticides, diseases from the original homeland of an invasive, and introduction of more competitive aliens from the homeland continues, but without much success. Many times, the only effective means to eliminate an invasive species is to apply manual labor: catching, pulling, or mowing. 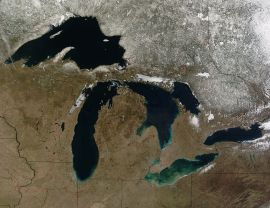 “The Great Lakes have seen successive invasions by non-native species that alter the ecosystem, including quagga mussels that filter the water and remove nutrients. At least partly as a result of the invasive mussels, Lake Michigan is becoming less hospitable to Chinook salmon, according to a new study led by scientists with the U.S. Geological Survey and Michigan State University.

“The scientists concluded that stocking could help sustain a population of Chinook salmon, but that the lake’s ecosystem is now more conducive to stocking lake trout and steelhead salmon. These two species can switch from eating alewife, which are in decline, to bottom-dwelling round goby, another newly established invasive prey fish that feeds on quagga mussels.