GR: Legalizing marijuana has been a progressive goal for many years. Over the same period, illegal pot farming and distribution has been one of the nation’s largest illegal industries. Now, the industry is becoming legal. Fine; people should have freedom to make personal choices. However, the pot industry, like most other industries has no concern for the consequences of its business operations. The story below is about pesticides, but other reporters have described the loss of wilderness, wildlife, soil, and water as pot farmers shove nature aside to make a profit.

Legalizing an industry can give public (government) control over product safety and environmental abuse. Of course, the current American administration is working hard to give all industries unregulated freedom comparable to the illegal pot industry. We all hope that this is a temporary blip in public control of the irresponsible actions of the weaker members of our species and that we can reinstate regulations soon.

“Illegal cannabis grow operations are polluting California waterways with banned pesticides, according to reports from Reuters. Despite recent legalization of recreational marijuana in the state, California still accounts for over 90% of illegal grow operations within the U.S. The extent of contamination puts wildlife and drinking water at risk, necessitating increased monitoring and enforcement to stop ongoing ecological damage.

“Unreleased reports obtained by Reuters indicate the presence of pesticides, such as diazinon and carbofuran, which have been linked to a range of adverse human health outcomes. Both chemicals inhibit acetylcholinesterase (AChE), an enzyme important for the transmission of nerve impulses. When AChE is inhibited, acetylcholine accumulates leading to overstimulation of neurotransmitters, resulting in muscle weakness, confusion, and paralysis, among other symptoms. Both chemicals have also been shown to be highly toxic to birds. According to EPA reports from the 1980s, carbofuran applications contributed to the death of between one and two million birds each year. Diazinon has likewise been linked to hundreds of bird kill incidents, with reports in the 1980s involving over 23 bird species in 18 states. 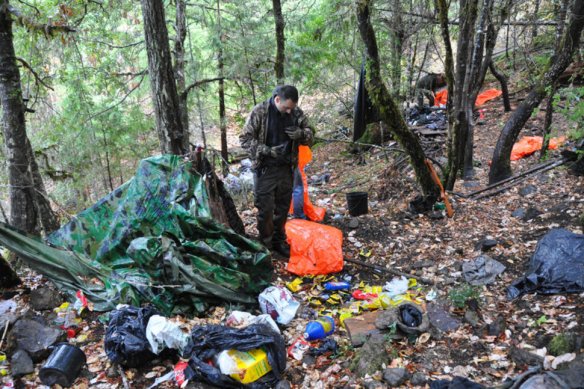 “Reuters reports that law enforcement officers have been hospitalized from only touching plants or equipment contaminated with illegal pesticides. A police dog almost died from jumping in contaminated water, and there have been accounts of cows poisoned by nearby grow operations. “Carbofuran is in the water, and it’s not supposed to be,” said Mourad Gabriel, PhD, an ecologist who works with law enforcement on marijuana contamination issues to Reuters.

“According to Dr. Gabriel, half of the streams in eight watersheds known for illegal cannabis cultivation are contaminated with pesticide residues. “It’s like a layer cake,” Dr. Gabriel indicated. “They put chemical on chemical on chemical. We’ll find different chemicals in the water on different years.” Indeed, while some creeks tested clear during one season, return testing is finding new chemicals making their way into streams, likely as a result of their movement through the soil.” –Beyond Pesticides (Continue: Beyond Pesticides Daily News Blog » Blog Archive Illegal Cannabis Operations Are Fouling California Waterways with Banned Pesticides – Beyond Pesticides Daily News Blog.)