In 1997, my wife and I purchased a small farm beside the Agua Fria River. The farm includes a section of the river, three large ponds, and many trees, shrubs, grasses, and weeds. Since the property crosses the Agua Fria River, we decided to name the place Coldwater Farm.

Coldwater Farm is in a rural area where we get frequent glimpses of wildlife that urban dwellers never see. In early evenings when the moon is full, we often see raccoons, skunks, javelina, rabbits, and foxes foraging for the sunflower seeds we scatter for the birds. Under the last full moon, the Pink Moon of spring, a young skunk and a young raccoon searched for seeds side by side, the tips of their fur occasionally brushing seemingly unnoticed. In the spring and through the summer and fall, deer spend their days and sometimes their nights at one of our ponds and in our yard. They and the other animals we see brighten our lives. And they evoke our sympathy.

Permanent Protection with a Conservation Easement

The Central Arizona Land Trust (CALT) has accepted responsibility for establishing and monitoring a Conservation Easement for Coldwater Farm. The easement will protect wildlife habitat by preventing future development. Though we can’t add any buildings or damage the wildlife habitat, we can continue to live on the farm and we can leave it to our children. Neither our children nor any future owners of the farm can build on the land or damage the habitat. CALT has launched a fundraising campaign to cover the costs of surveys, appraisals, and a permanent trust fund to pay for annual monitoring.

After we moved to the farm, we began listing wildlife species that we saw. Our bird list has 129 species and includes the Yellow-billed Cuckoo and the Southwest Willow Flycatcher, both on the U. S. Endangered Species list. We have summarized our observations on the farm and its surroundings in four books:

If you’ve been watching the news, you know Earth is in the early stages of the Sixth Mass Extinction of wild plants and animals. Some scientists warn that the continued loss of species coupled with global warming, droughts, and large wildfires will remove much of the vegetation that protects the soil from wind and water erosion. Soil is our most fundamental biological resource. It anchors and feeds the roots of plants, and it absorbs and stores rain and snow melt. Without soil, even small rains cause floods. Without soil, Earth would be as barren as the Moon.

We know that our house, sheds, and pastures replaced habitat that wild animals could use. As we have learned the importance of wild plants and animals for healthy ecosystems, we have realized that the land was not ours to use without regard for the consequences for wildlife. Though we cannot replace the lost habitat, we can protect what remains.

The World Wildlife Fund (WWF) reports that since 1970, the average size of all plant and animal populations on Earth has fallen by over 50%. WWF predicts that by 2100, the decline will reach 90%. As populations fall, soil becomes more vulnerable and extinctions climb. All those beautiful, innocent creatures that are ours to see by the wonder of millions of years of genetic trial and error, gone forever. Edward O. Wilson and other naturalists believe to stop the losses we must set aside one-half of Earth’s land and seas exclusively for wildlife. Could we do that?

We could, but we need a united global effort. 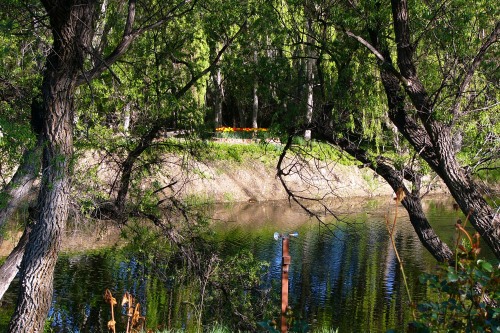 One of the ponds at Coldwater Farm

Conservation easements are important in the global effort to preserve wildlife. Twenty-seven percent of the United States is already federal protected land—forests, multiple-use lands, parks, monuments, and wilderness. If we make small landuse adjustments to restrict livestock grazing and recreation, we will be half way to the level of conservation needed for wildlife populations to halt their decline and begin to increase. Simple arithmetic shows that if the people of the United States and other countries redirected their taxes to conservation, we could buy back the land needed to reach 50% within a few years. If, during the same period, we incentivized renewable energy and phased out fossil fuels, we could assure that wildlife would survive as human civilization continued to advance. My wife and I want to do our part. Though tiny compared to the global need, our conservation easement is a symbol. It is a step in the right direction. We hope that many other landowners will be inspired to use conservation easements to help protect their land.