Along with budgeting and seeking public support, determining priorities is an essential element of weed-control strategy. This article considers natural vegetation and does not deal with weeds in irrigated crops.

Cost effective weed management focuses resources on the most dangerous species and the most valuable sites. Less than 10% of the hundreds of native and introduced alien weed species present in deserts will invade native vegetation. Many invasive species have little impact when they do. Because of financial limitations, this has prompted greater emphasis on passively monitoring weed infestations to learn whether they will cause problems. Prioritization equips weed managers for immediate response when aggressive species appear.

Locating information on the ecology, distribution, and control of weeds requires literature searches for each species. Though the information produced by the searches is variable and may not cover local conditions, it provides a first approximation of the relevant characteristics and control treatments for species that are present.

Weed scientists have developed many prioritization systems. For example, Byers et al. (2002) provide a risk-assessment guide that ranks species according to potential for:

Species distribution information by country is available online from the Global Register of Introduced and Invasive Species (http://www.griis.org).

The risks are uncertain for many species, populations, and places. And even after weed managers learn a species’ characteristics and the conditions of a site, a significant level of uncertainty remains. Environmental fluctuations, land-use changes, and species adaptations require frequent adjustments of prioritization systems.

According to Rew and Pokorny (2006), the ideal prioritization system combines weed and site ranking integrating ecological knowledge of species with site conditions, and adjusts with observed results of treatments.

Species information is often be useful across regions, but every site requires direct observation. Here is a sample recipe for the process.

First, divide large or complex sites into homogenous Weed Control Areas (WCAs) aligned with administrative or environmental boundaries. Next, use information from an initial inventory to subdivide the WCAs into Weed Control Zones (WCZs) based on weed distribution and planned treatments. Use the site categories outlined below to rank the WCZs.

Hobbs and Humphries (1995) propose four categories of management action based on resource value and the level of site disturbance. Thus, parks, wilderness areas, critical habitats, etc. are in the highest category.

Desert streams and riparian areas play such an important role in arid ecosystems they have high value even though they are at high risk of invasion. Besides providing critical habitat, riparian vegetation occupying floodplains is an important natural shock absorber that reduces flooding, erosion, and sediment transport.

Many countries have developed prioritization systems and have weed management plans in place. I prepared the table below to illustrate the issues involved, not serve as a working system. 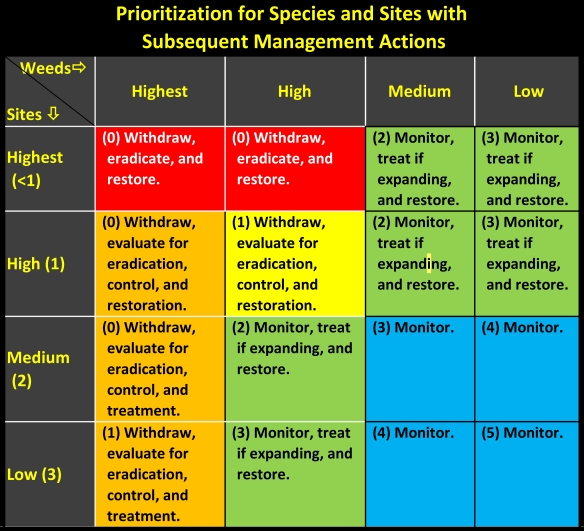 Hobbs, R.J. and Humphries, S.E. 1995. An integrated approach to the ecology and management of plant invasions. Conservation Biology 9: 761-770.