GR:  Now, here’s a truly scary story. Happily, it’s question, “what happens if we burn all the fossil fuels,” is an unlikely issue because of the progress alternative fuels are making. There are some interesting points, however, and I especially liked the drawing. Look at the red segment at lower left. It has the elements of our probable future.

“If we burn all the fossil fuels “not only will the resultant climate change be faster than anything Earth has seen for millions of years, the climate that will exist is likely to have no natural counterpart, as far as we can tell, in at least the last 420 million years.” — Gavin Foster, Professor of Isotope Geochemistry at the University of Southampton

“Back in the 1780s as coal-fired smoke stacks sprouted across England to belch their black soot into the hitherto virgin skies of Earth, it’s likely we had not yet an inkling of the vast destruction these dark Satanic Mills were ultimately capable of unleashing: 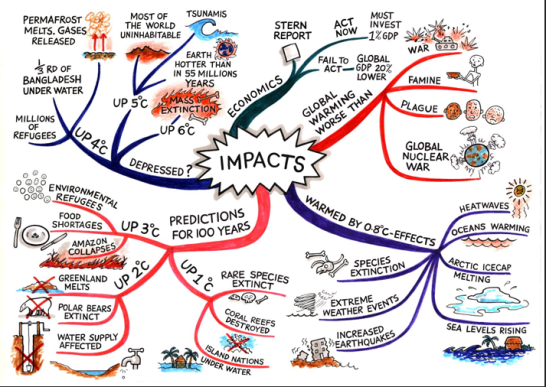 The potential and likely global impacts of climate change are bad enough during the 21st Century with between 1.5 and 6 C + warming expected. But if we burn all the fossil fuels, new science indicates that about 10-18 C worth of warming is ultimately possible. Looking at these impacts, what sane person would recommend doing such a thing? Image source: Climate Impacts.

“Svante Arrhenius, by the late 19th Century, had hinted that coal burning might warm the Earth by a tiny bit in a few thousand years. But the very fossils we were digging up and burning at an ever-more-rapid pace warned of a different and far more ominous story (see video above). They hinted of a time when massive volumes of ancient carbon stored in the Earth were released into the atmosphere over the course of thousands of years. And that this release created such hot and toxic conditions that, for most living things, the Earth was no longer habitable.” –Robert Scribbler (Continue: robertscribbler | Scribbling for environmental, social and economic justice.) 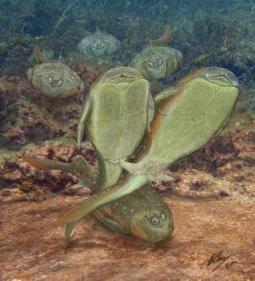 It may not have been love as we know it, but around 385 million years ago, our very distant ancestors—armoured fish called placoderms—developed the art of intercourse.

GR:  Hmm, so sex came long after sentience.  After 385 million years we still haven’t advanced to sapience.  Is that sad, or what?