Ben Kilham argues that simple observations are still an important component of conservation science.  Everyone can learn to recognize birds and butterflies and note when and where they’re seen.  This is the argument I made in the Arizona Wildlife Notebook.  The notebook gives Arizona residents and visitors a practical tool for recording animal sightings. 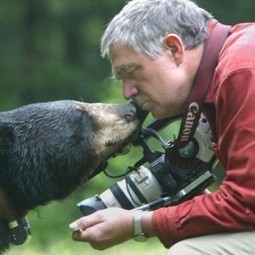 As conservation science increasingly draws from sophisticated models and genomics, does natural history still have relevance? Benjamin Kilham, a dyslexic who has made significant contributions to bear research, builds a powerful case for field observation in his book, “Out on a Limb.”

What is Intelligence and How is it Used in Fiction?

Familiar components of intelligence are reaction time, sensitivity, problem solving, foresight, and memory.  Novelists often elevate one or more of the components to make their characters more interesting or to give them the necessary ability to achieve plot elements.  Sometimes we pick up hints that a character is intelligent and then we are delighted when she almost magically connects disparate clues and solves the crime.  Dr. Who and Sherlock Holmes are spectacularly successful at this.  In other instances we enjoy watching a character’s routine use of his powerful intellect.  It is fun to watch Lee Child’s Jack Reacher use his exceptionally acute hearing to follow the progress of a professional tail who thinks Reacher is totally unaware of his presence.

Characters are also defined by their temperament, they way they experience and express anger, love, jealousy, regret, and so forth.  Temperament might seem to be the only real concern for character building, because it so clearly distinguishes individuals.  Intelligence, however, sets limits on the expression of temperament.  A smart wise-ass is more likely to produce interesting insults than a dumb one.  And an intelligent character is more likely to notice a detail such as the shape of a tree and see the connection between shape, competitive ability, and history of the tree.  Intelligence determines the depth and richness of a character’s response to experience.

What produces intelligence?  We know that brain size, composition, and internal connectivity are involved, but we only know that these are correlated with measured intelligence (see the references).  We do not know how they work, and we do not know the full list of factors that are necessary.  Perhaps high intelligence requires the presence of structures such as complex hands, thumbs, and voice box, or perhaps an undiscovered chemical.  Whatever the requirements, why haven’t they been met in many complex organisms?  Why aren’t all animals intelligent?

The theme and plot for “Corr Syl the Warrior” required highly intelligent characters with powers of thought beyond human ability.  I used evolution to create them.  I imagined an Earth on which evolution, in its gloriously random way, included intelligence among the traits of the first higher organisms.  I imagined that intelligence was common to all animals, and that along with other character traits, natural selection would continue to improve intelligence.  By the time dinosaurs appeared, most animals were as intelligent as humans are now (see the references).

Before I could use intelligence in my story, I had to answer numerous questions.  A central question concerned competition and conflict.  Would the many intelligent species on Earth have lived and worked together peacefully?  Or would they have built weapons and fought wars?  Observing the warlike tendencies of our modern human civilization, we might expect that universal intelligence would have raged across the Earth like a firestorm leaving nothing behind, perhaps not even the planet itself.  So this is what I decided must happen:  🙂 END_OF_DOCUMENT_TOKEN_TO_BE_REPLACED

Checklists of plant and animal species one might see in a particular place make useful notebooks for recording sightings.  Sometimes called life lists, the species names in such notebooks are comparable to the stamps, coins, and arrowheads collected by others.  Though their objects are different, all collectors want to protect their collections.  They are all curators or conservationists.  Checklists are one of the basic tools for nature conservation.

The photograph shows a Rock Squirrel (Spermophilus variegatus) on a fence post.  Rock Squirrels prefer rocky areas and we often see them serving as sentries atop boulders.  This one lives in a colony near my home on the floodplain of the Agua Fria River in Dewey-Humboldt, AZ.  Only one boulder, a stone the size of a large watermelon, can be found anywhere on my 20 acres.  So the squirrels lookout from fence posts, tree branches, and tractor seats.

END_OF_DOCUMENT_TOKEN_TO_BE_REPLACED

Links to Resources for Writers

Here are a few quality links to writing references.  There are hundreds more, but these might be all you need.  If you have a favorite that isn’t listed (or is), tell us about it. Thank you.

Many of the sites provide their own lists of resource links.  For instance, Every Writer’s Resource has a great list of publishers.

Clark argues that writing is more a craft than an art.  He introduces 50 tools that are useful for writing fiction, nonfiction, and both.  The 50 chapters are clear, succinct, and well-illustrated with examples from work by Clark and other authors

The book is divided into four parts:  Nuts and Bolts, Special Effects, Blueprints, and Useful Habits.  Each chapter is followed by workshop exercises.

Clark’s tools can be used for fiction, nonfiction, and combinations of the two.  Tool 25 describes and illustrates the difference between reports and stories. “Use one to render information, the other to render experience.”  Clark shows how the reporter’s five Ws and H shift their meaning for the storyteller. And he illustrates how writers combine the meanings to produce powerful effects.

Tool 50 presents a simple blueprint to guide the use of the tools.  The blueprint divides writing into five sequential steps that lead to finished products.

Other writing texts cover Clark’s tools from different angles and with different examples.  I think many beginning writers will find Clark’s argument and his clear style will give them confidence and techniques they can use to construct their own projects.

Recommended.  Find this book and others on writing at the Writer’s Bookstore.

The growing human population is wiping out Earth’s resources and many plant and animal species.  Scientists are calling this the Earth’s sixth mass extinction event.  They say that we are extinguishing species between 100 and 1,000 times faster than the average rate throughout Earth history.

We can’t seem to do anything about the human population boom, so we can’t stop species extinctions.  We can sometimes intervene to save a species.  We can return species to places they formerly occupied, and we can protect or restore damaged habitats.  Of course, we have to know that species are declining before we can decide to intervene.  The only way to know how most species are doing is to conduct repeated field surveys.  On foot, clipboard in hand. END_OF_DOCUMENT_TOKEN_TO_BE_REPLACED

I removed Grammarly from my computer. It caused MS Word to stutter and hesitate, and it took too long to produce anything useful.

Grammarly spent most of its time making ridiculous synonym suggestions. And it wasted my time with circular suggestions.  When I followed Grammerly’s suggestion for revising a sentence, I sometimes got a new suggestion that would reproduce the original construction. I did like the “squinting modifier” advice, but not the hour the program took to find and point out the single occurrence. Grammarly gets a laugh or two, but I cannot recommend it for serious writing.

I do recommend the Grammar & Composition articles by Richard Nordquist on Ask.com. Five stars.