View of the border fence between the US states of Texas and New Mexico, left, and Ciudad Juarez, Mexico, right, on Jan. 25, 2017.

GR:  Instead of building a wall on our southern border, we should look closely at the causes of emigration from the south. Is there anything we can do in Central and South America to help reduce immigrant numbers? Worldwide, the growing human population is destroying wildlife habitat and polluting the Earth’s surface. Rather than solving our emigration problem, a wall merely treats a symptom of over population and climate change. And it causes problems for wildlife.

Drought-prone places like Arizona, Syria, and the dry west coast of Central America are facing increasing emigration pressure as surface and subsurface supplies of water decline. We should be analyzing potential steps to take to mitigate drought effects in the Central American Dry Corridor (CADC). Drought is increasing in the tropical dry forest region on the Pacific side of Central America that stretches from the Pacific Coast of Chiapas, Mexico, to the western part of Costa Rica. The drought is impacting portions of Guatemala, El Salvador, Honduras, and Nicaragua. Is there an environmental solution to the decline in productivity or is population reduction through emigration and birth control the only answer?

Severe drought has continued for several years. Here’s a map that shows locations. 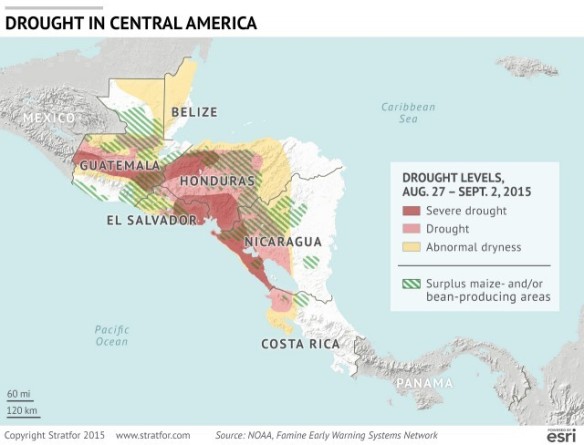 How Trump’s Wall Would Alter Our Biological Identity Forever

“Besides the 600 miles installed, there may be 1,953 miles of border wall yet to come. In one generation, humans will have successfully disintegrated an extraordinary biodiversity web that evolved over millions of years. It is a legacy of which we should not be proud. Building the border wall sacrifices the ancient biodiversity of North America for the momentary political gain of one president. Our biodiversity is less flexible, requiring millions of years to evolve to its intricate state of ecological intactness. Further construction of the U.S.-Mexico border wall will undoubtedly lead to the death of countless species in the process—adding to the 10 million species marching towards extinction worldwide as a result of the broader human footprint” –Jennifer R. B. Miller.

2556 scientists have endorsed a study that shows just how devastating Trump’s wall will be for wildlife.