Introduction to the Weeds

While I studied vegetation ecology at Arizona State University, my boys and I would sometimes walk the two miles from our apartment to campus to pick up mail and assignments. We lived just north of the Salt River, once a fine desert stream that modern dams and diversions turned into a dry riverbed. We would enter the river channel a few blocks from our apartment and amble along for a mile and a half until we neared the campus. That hike was one of our favorite times together. The channel held scattered and battered Cottonwood trees, Mesquite, Seepwillow, Acacia, clusters of Squawbush, Brittlebush, Ambrosia, thickets of Sunflowers, the mighty Mullein, patches of feathery Storksbill, curly Heliotrope, lots of bare ground, and a million stones rounded by their history tumbling down the river. I think it was during those hikes that my oldest boy (age nine) developed the accuracy and strength to pitch for a series of baseball teams.

Between rock throwing attacks on old tires and washing machines, we saw birds, rodents, and lizards, but no people. In all the times we walked down the river to the urban campus of 40,000 students and thousands of staff, we never met another human. People weren’t there because our society considers such places as the Salt River’s dry riverbed as unlovely wastelands. And the unique and fascinating plants living there are a universe away from the cars and streets and affairs that fill our time.

Weeds are the most dynamic members of the botanical world. The many ways they disperse their seeds and smite their competitors are often unexpected and enlightening. Weeds’ ability to colonize and thrive in damaged and hostile environments suggests that they will be the plants that survive the Anthropocene. Some weeds will make fine companions for any of us that survive, but some weeds would be inimical to humans and other animals.

Weeds evolved the ability to colonize and flourish after natural disturbances long before humans appeared. Natural selection polished the special traits of weeds for millions of years before we branched out in the primate tree and learned to herd, farm, and build. For weeds, the breaks in nature due to livestock trampling, plowing, and building are the same as natural disasters.

Weed traits include dispersal and growth mechanisms that let them succeed in damaged habitats. As the number of farms and domestic animals increase, the places suitable for weeds also increase. Once a small band of specialists living in the relatively tiny naturally disturbed sites, weeds have increased their numbers to become a dominant species group.

I want to report what I’ve learned about weeds, and I want to describe some of the weeds that live near my home. Here’s a link to some articles I’ve written about weeds. I don’t plan to use unusual words, but a few terms are useful. Here’s a link to weed anatomy drawings and definitions. The first weed I’m covering is:

Alkali Heliotrope’s tiny fragrant flowers delight bees and gnats. The uncoiling spike, a flower-studded fiddleneck, reveals little beauties pure white with yellow-green eyes that purple in sunlight. This bluish green perennial grows to about one foot, but mostly it forms flat patches of overlapping branches up to four feet wide. The plants are hairless, but lightly dusted with a white powder that easily rubs off.

A native of arid North America, Quail’s Delight can edge into a lawn or garden. Removal by pulling is a simple cure, but the plant has no thorns or burrs and you might wish to leave it on unused sites where it will protect your soil from wind and water erosion.

The plants colonize exposed alkaline or saline soils and the banks of streams and washes in arid western U. S. and Baja California. You will find similar varieties around the world. I’ve seen this one growing beside a canal in Tempe, Arizona, and a very similar variety beside limestone rocks near Fourteen Mile Creek in Oklahoma. 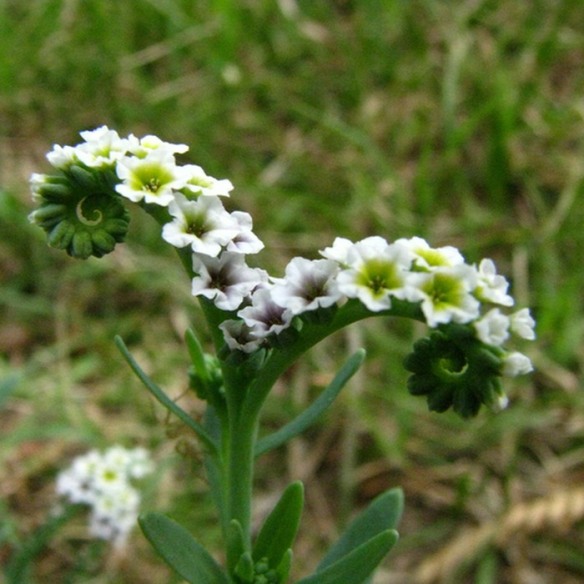