GR: As I’ve often reported, only construction and total habitat destruction have done as much as invasive plants and animals to reduce global biodiversity and productivity. Introduction of invasive species is continuing its impact and the rate is accelerating. Global warming is gaining fast, and will combine with the others of the human impacts to push the human impact on the Earth to extremes that will require millions of years of recovery after we are gone. Here’s a report by Paul Simons on an invasion that will take years of intense labor to stop. 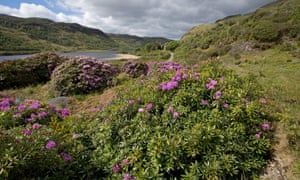 “Rhododendrons are flowering now in a magnificent springtime spectacle – but they are thugs, invading some of our finest and most precious countryside with catastrophic impacts on wild plants and animals.

“Rhododendron ponticum was first brought to Britain, probably from Spain or Portugal, around 1763 for botanical gardens and used on big estates as cover for game birds. But the shrub has spread out of control with huge damage to many native woodlands, heaths and other wild places like the Snowdonia national park. The plant now covers 98,700 hectares, roughly 3.3 per cent of Britain’s total woodland, a report by the Forestry Commission found, and Scotland has been hit particularly hard, where it covers 53,000 hectares.

“Rhododendron grows into huge bushes with thick vegetation that blocks out sunlight and smothers most other wild plants and trees, stopping them from growing or regenerating. Its leaves are toxic to animals and repels wildlife from earthworms to birds. Many bushes have become infected with the highly pernicious tree disease called sudden oak death that threatens many types of trees and shrubs. Outbreaks of the disease in the UK, especially on larch trees, have often been linked to Rhododendron ponticum.

“Each plant can produce one million or more tiny seeds each year that spread in the wind, and it also spreads with massive tangles of branches rooting in the ground. The plant is incredibly difficult to get rid of by digging up or using herbicides. Snowdonia national park and several other sensitive areas have tried to destroy the invading rhododendron involving hundreds of people over many years digging up the plant. It’s expensive, time-consuming and takes years to completely eradicate.” –Paul Simons (Source: A spectacular thug is out of control | Science | The Guardian.)