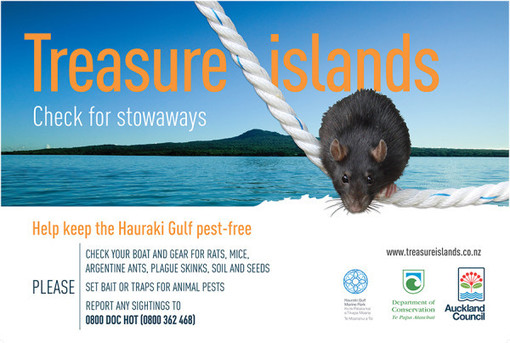 “Without island biosecurity pests will rapidly recolonize islands from which they have been eradicated, or worse still colonise islands for the first time. Only with a rigorous audited biosecurity programme can pest-free status be maintained. The gold standard in New Zealand is Nature Reserve islands like Antipodes Island, where quarantine occurs before, during and after arrival, surveillance occurs pre and post border, and incursion response strategies are in place. The New Zealand Department of Conservation operates a robust island biosecurity programme to protect their conservation investments, but it was reported in the news today that last year numbers spiked, including mice, rats, cats and stoats all making it out to islands. Stranger critters such as ferrets and even otters have reached New Zealand’s offshore islands in the past. Unlike the original pest eradications which cleared these islands, and were years in the planning, a response to an incursion must, as DOC manager Andy Cox points out, be as rapid as if a forest fire had broken out. Pest incursions are the biological equivalent of chemical spills, only the agent can keep reproducing.”  Sourced through Scoop.it from: voices.nationalgeographic.com

GR:  Biosecurity is another term for nature conservation.  It is a relevant concern planet wide.  This article focuses on invasive species, but there are more things people do that are affecting  biosecurity on land and sea.

The sagebrush vegetation of the Great Basin is the most abused and devastated ecosystem in America. Livestock grazing, introduced invasive plants, and wildfire have replaced it with invasive alien plants.

This Wednesday, May 20 the PBS show Nature is showing “The Sagebrush Sea”, a documentary shot, edited, and produced by the Cornell Lab of Ornithology’s multimedia team. The film focuses on wildlife and conservation in the threatened sagebrush region that covers 250,000 square miles of North America. Watch the trailer at Sagebrush Sea Trailer. Check your local PBS station for broadcast time. Learn more at The Sagebrush Sea.

GR:  Before plants and animals can invade a habitat and become problems, they must reach the habitat.  Potentially invasive species are no threat if they stay home.  For centuries, we have been spreading plants and animals around the globe, and some of them have invaded the new habitats. Human sailing ships that began crossing the oceans 500 years ago gave a tremendous boost to natural plant and animal dispersal.  Though some plant seeds can blow or float across the oceans, most cannot.  Many, however, can stow away in cargo and on ship hulls.  Regular human travel across deserts and through the jungles began even earlier.  A friend once counted the plant seeds in car-wash drains and found more than 400 species.  Human assisted dispersal is continuing and after global warming and habitat destruction, is the most critical impact that humans have on natural ecosystems.  If Elon Musk and Pope Francis can convince our leaders to solve the global warming crisis, we can turn our attention to other critical issues including population and pollution.  Learn more about invasive plants (https://garryrogers.com/invasive-plant-articles-by-garry-rogers).

Messing with Nature and Calling it Range Management

“While native plants are adapted to thrive in our region, they don’t always provide the best forage for livestock or wildlife. But what if you could change that? What if you could convert bad forage to good? That’s the question Agricultural Research Service (ARS) scientist Lance Vermeire asked when studying purple threeawn, a decidedly less than…”

GR:  The ignorance displayed by this range manager is shocking.  It should remind us all that focusing too closely on a single goal can cause us to overlook critical alternatives.  This article describes an instance where managing nature to benefit domestic livestock creates a willingness to take chances.  Range managers have gambled on new techniques and new species for many years.  They ignore negative possibilities and focus on their goal—more food for cows or sheep. They do not consider ecosystem responses to their new techniques.  They do not consider the effects on on soil microorganisms, and they do not worry about future invasion potential. The result of similar “range management” has been the loss of more than 100-million acres of productive native grasslands and shrublands in the western U. S.  Go here to read more about the results of foolhardy management of rangelands.

By the end of the century, the woodlands of the Southwest will likely be reduced to weeds and shrubs. And scientists worry that the rest of the planet may see similar effects

GR:  Continued harvest (logging and livestock grazing)  will work with wildfires to remove long-lived species.  This is already visible in arid regions.

The proliferation of beavers and minks at Chile’s southern tip – a legacy of a failed attempt to establish a fur industry – threatens biodiversity in one of the world’s most pristine corners.  Source: www.bluechannel24.com

GR:  Human introductions (accidental and intentional) account for 99.99% of invasive species problems.  It all began more than 500 years ago as sailing ships began crossing the great ocean barriers.  Surprising that after all these years, we can still find problem species to transport.

Tropical fish are moving north as the global climate warms, in some cases with devastating impacts to ocean ecosystems.  Source: summitcountyvoice.com

GR:  Invasive species of the land, water, and air are causing greater immediate impacts on Earth ecosystems than global warming.  At present, human activities are spreading far more invasive species than global warming. This will change in the future, but for now, we can stoop many invasives with the well-known methods for inventorying, monitoring, and prevention.  Of course, the cost might be as astronomical as that of a warplane.

“In a recent Opinion in National Geographic News (14 October 2014), U.S. Ambassador Kenneth M. Quinn makes a compelling case that roads can have major benefits for rural people—improving access to modern farming technologies, education, and healthcare, and even limiting the influence of extremist groups that prey on isolated communities.

“However, Ambassador Quinn tells only half of the story. Yes, many roads or road improvements can yield major economic and social benefits. But other roads become environmental disasters—opening a Pandora’s Box of problems such as illegal logging, poaching, wildfires, and land speculation.” 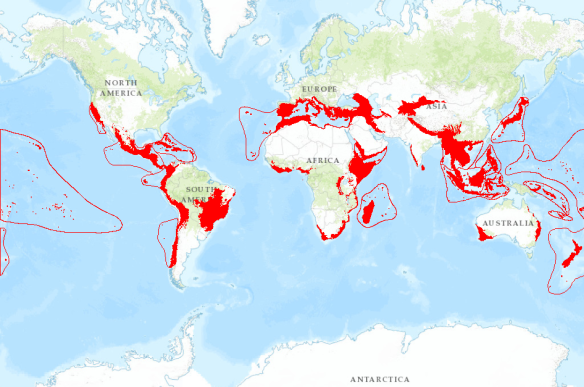 Our findings show that hotspots may experience an average loss of 31% of their area under analogue climate, with some hotspots more affected than others (e.g. Polynesia–Micronesia). The greatest climate change was projected in low-latitude hotspots. The hotspots were on average suitable for 17% of the considered invasive species. Hotspots that are mainly islands or groups of islands were disproportionally suitable for a high number of invasive species both currently and in the future. We also showed that hotspots will increase their area of pasture in the future. Finally, combining the three threats, we identified the Atlantic forest, Cape Floristic Region and Polynesia–Micronesia as particularly vulnerable to global changes.

Given our estimates of hotspot vulnerability to changes, close monitoring is now required to evaluate the biodiversity responses to future changes and to test our projections against observations.

LONDON — Humans risk causing irreversible and widespread damage to the planet unless there’s faster action to limit the fossil fuel emissions that cause climate change, according to a leaked draft United Nations report.