GR:  Monsanto is facing enormous financial penalties for their continued production and sale of toxic chemicals. This post (and earlier stories) discusses PCBs. Other reports describe similar indefensible production and sale of ecosystem destroying and cancer causing herbicides. I guess that once the company directors decided that profits were more important than the health and life of people and natural systems, they would sell any profitable chemical they could produce. The company strategy includes controlling government regulations and regulators.

“Washington could have an ace up its sleeve in its major lawsuit against Monsanto over PCB (polychlorinated biphenyls) contamination throughout the state.

“Before switching operations to agriculture, Monsanto was the primary manufacturer of PCBs, which was used for paints, electrical equipment and other products, from 1935 until 1977. The U.S. Environmental Protection Agency (EPA) banned PCBs in 1979 due to its link to birth defects and cancer in laboratory animals. PCBs can have adverse skin and liver effects in humans and can also linger in the environment for many decades.

“But according to documents published by The Poison Papers project, a new online archive of more than 20,000 documents obtained from federal agencies and chemical manufacturers, Monsanto possibly knew as early as the 1960s—at least a decade before the federal ban—that PCBs were harmful to public health and the environment but continued to manufacture and sell the widely used product anyway.

“Washington assistant attorney general Bill Sherman told the Guardian that the archive contained information the state was previously unaware of.

“If authentic, these records confirm that Monsanto knew that their PCBs were harmful and pervasive in the environment, and kept selling them in spite of that fact,” he said. “They knew the dangers, but hid them from the public in order to profit.”

“Sherman cited a particular Monsanto pollution abatement plan from October 1969 that was published in the Poison Papers archive. A section of the plan titled, the “damage to the ecological system by contamination from PCBs,” states: “The evidence proving the persistence of these compounds and their universal presence in the environment is beyond questioning.”

“Further, the document says that “direct lawsuits are possible” because “customers using the products have not been officially notified about known effects nor [do] our labels carry this information.” –Lorraine Chow (Continue: Poison Papers: Monsanto Knew PCBs Were Toxic for Years But Sold Them Anyway).

GR: Of course, Trump and his band of nature trolls will ignore the experts. Nevertheless, the thoughts of each one are worth reporting. And remember, global warming is one of the reasons that the doomsday clock is at two and a half minutes to midnight.

“President Donald Trump’s March 28 Executive Order on Promoting Energy Independence and Economic Growth is but the latest in a series of rollbacks intended to dismantle the Obama administration’s climate change policies. Although Trump never uttered the words “climate change” during the signing ceremony, his order will have profound effects on programs and environmental protections intended to rein in global warming—primarily by reducing carbon dioxide emissions.

“Among other things, Trump’s order lifts a moratorium on coal leasing on federal lands, removes restrictions on fracking on federal and tribal lands, directs the Environmental Protection Agency to rewrite the Clean Power Plan regulations designed to limit emissions from power plants, and eliminates the requirement that climate change be considered in federal environmental reviews and decision making. The White House claims that these moves will bring back jobs in coal mining and foster energy independence.

“The order does not entirely obliterate Obama’s climate legacy. The Clean Power Plan is not yet in effect, and will have to go through a lengthy rule-making process that will likely include legal challenges. Vehicle fuel-efficiency standards are still standing, although the White House says a rollback is coming soon. State mandates for renewable energy, along with other efforts aimed at reducing emissions, will continue. And the White House is thus far silent on whether the president intends to withdraw from the Paris Agreement.

“Some critics say the Trump administration’s environmental rollbacks are even worse than they expected, and that it will be impossible for the United States to achieve its Paris pledges without the programs and protections that are being cut. Others see a silver lining for the Paris Agreement: Maybe the failure of US leadership will clear the way for other nations to work toward a more ambitious shift away from fossil fuels.

“We asked leading experts on climate change to weigh in on what the Trump rollbacks mean for climate change, and for the Paris Agreement in particular. Here are their thoughts.Invited

GR:  This type of management (eliminate predators to please human hunters) is more than just a crime against nature; it’s a foolish plan that has failed many times before. Predator and prey populations go through natural cycles. When people interfere, we can’t predict what will happen. It would be better to hand all the hunters a camera and challenge them to get some unique photos. 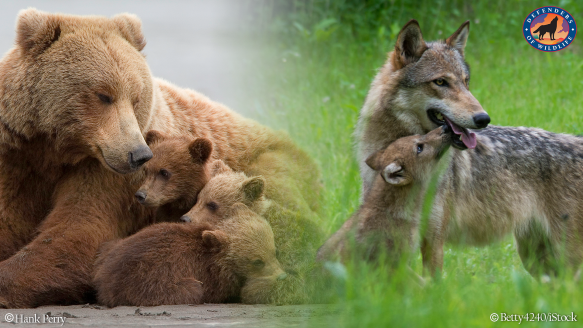 The Alaska National Wildlife Refuges Rule is under siege, and the consequences could be dire for bears and wolves in the state.

“You may have heard about H.J. Res. 69, a dangerous bill that jeopardizes bears, wolves and other carnivores by tossing out the Alaska National Wildlife Refuges Rule. This legislation is set to hit the Senate floor any day now, and its enactment could have drastic implications for wildlife in Alaska and public lands management nationwide.

“H.J. Res. 69 would overturn the Alaska National Wildlife Refuges Rule, which the Obama administration issued last year to conserve native carnivores, including bears, wolves and their young, on as many as 76 million acres of national wildlife refuges in Alaska. The timing of when this rule was finalized matters significantly, as its fate is now subject to the Congressional Review Act (CRA)—you can read more about that here.

“Legislators and their special interest allies already jammed H.J. Res. 69 through the House of Representatives, despite strong bipartisan opposition that labeled it as “The Killing Baby Animals in Alaska Act.” The Senate is currently considering whether to bring this harmful bill up for a vote.

Threatening Wildlife in Their Home

“Without the Alaska National Wildlife Refuges Rule in place, the state of Alaska could pursue its scientifically indefensible predator control program on these federal lands. This controversial program allows the killing of mother bears and their cubs, killing wolves and their pups in their dens, and trapping, baiting and using airplanes to scout and shoot bears. The state’s goal is to drive down carnivore numbers to artificially inflate populations of game species.” –Defenders of Wildlife (Continue reading:  Carnivores in the Crosshairs – Defenders of Wildlife Blog.)