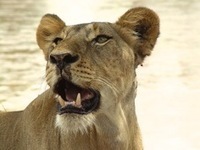 It was a top honour to win the Whitley Award last week, but now we have our very own video narrated by none other than the legendary Sir David Attenborough. Sir David’s wildlife films have inspired us for years!

The video was assembled by the fantastic team at the Whitley Fund for Nature (WFN) and played at the awards ceremony, when I received the award along with the 7 other amazing conservationists who also got an award. I even got to say hello to Sir David, such a treat.

We are deeply humbled by this, and thank WFN and all the great people I met last week in London!

“The Whitley Fund for Nature is unique. It doesn’t put its own people on the ground but seeks out local leaders who are already succeeding. It puts its mon…