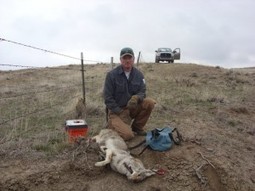 “According to the Washington Post, Wildlife Services, a federal agency, killed more than 4 million animals last year alone, including 75,326 coyotes, 866 bobcats, 528 river otters, 3,700 foxes, 973 red-tailed hawks, and 419 black bears. The agency uses snares, traps, poisons, aerial gunning and dogs to kill wild animals, often killing pets and other non-target animals by mistake. An investigative series by the Sacramento Bee found that between 2000 and 2012, Wildlife Services “accidentally” killed more than 50,000 non-problem animals, more than 1,100 dogs, and several imperiled species – including bald and golden eagles. In addition to endangering recreationists and their companions, these services serve to only disrupt the natural balance of wildlife, degrade habitat, leave orphaned animals, increase the risk of disease, and lead to the loss of many ecosystem services that benefit human society directly and indirectly.

“Humboldt County citizens are known for their environmental ethics and forward-thinking ideas. Join EPIC on Tuesday, July 22 at 9AM at the Eureka Courthouse in the Supervisors Chamber to voice your opinion on whether or not Humboldt County should end its contract with Wildlife Services.”

GR:  Wildlife Services, a branch of the U. S. federal government, is accustomed to automatic renewal of its agreements.  Let’s make the Service’s actions public and call for a policy overhaul.