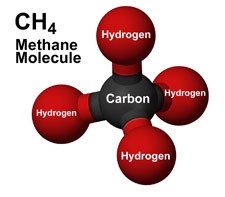 “We’ve talked quite a bit about the Arctic Methane Monster — the potential that a rapidly warming Arctic will force the release of disproportionately large volumes of methane from organic material locked in permafrost and in frozen sea bed hydrates composing volumes of this powerful greenhouse gas large enough to significantly increase the pace of human-forced global warming. But if we consider the globe as a whole, the Arctic isn’t the only place where large methane stores lurk — laying in wait for the heat we’ve already added to the world’s oceans and atmosphere to trigger their release. And a new study out of the University of Washington provides yet another indication that the continental shelf off Oregon and Washington may be one of many emerging methane release hot spots.

“For all around the world, and beneath the broad, blue expanse of the world’s seas, rest billions and billions of tons of frozen methane hydrate.

“A kind of methane and ice combination, frozen hydrate is one of the world’s most effective natural methods of trapping and sequestering carbon. Over long ages, organic material at the bottom of the oceans decompose into hydrocarbons, often breaking down into methane gas. At high pressure and low temperature, this methane gas can be locked away in a frozen water-ice hydrate lattice, which is then often buried beneath the sea bed where it can safely remain for thousands or even millions of years.”  More at: robertscribbler.com