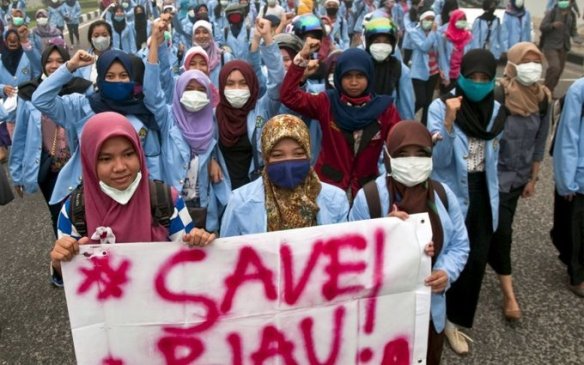 The worst climate crisis of the year is happening right now in Indonesia due to slash-and-burn deforestation that sends up as much carbon dioxide as the U.S. does. It’s all for the sake of palm oil.

Each day in Indonesia, forest fires release as much carbon dioxide as the entire United States. The fires have been burning since July, thanks to a combination of slash-and-burn land clearing, flammable peat soil, and El Nino. And the worst part is, although your and my consumption habits are largely to blame, there’s almost nothing we can do about it.

Palm oil companies are largely to blame for this crisis. The larger companies usually don’t set the fires, but (not unlike the chocolate industry) they often buy palm oil from smaller landholders, who do. This makes it very hard to assign blame (there are over 200,000 small landholders in Indonesia) and hold the larger firms accountable, and it means the direct culprits are often impoverished small farmers trying to make ends meet.  From: www.thedailybeast.com.

GR:  The market for palm oil is huge and it’s growing. The only way that deforestation will stop is for demand to decline. The major distributors might volunteer to buy and sell less and we might volunteer to use less. However, the most effective means to cut demand is for us to begin reducing our population and our need for food and fiber taken from the land.

It’s hard to have faith in voluntary programs. Cargill and the other major commodities distributors would have to accept zero growth, and we consumers would have to be educated and given alternatives. Our traditional growth and development models do not support either action.

1 thought on “The World Runs on Palm Oil, and That’s Fueling Climate Change”