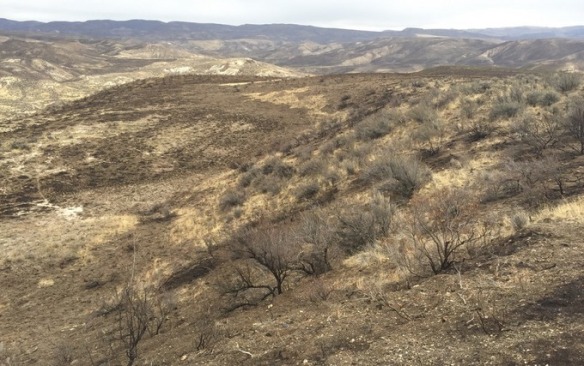 Last week a Associated Press article proclaimed that the rehabilitation taking place after the Soda Fire, which burned 225,953 acres along highway 95 on the Oregon/Idaho border in August, was going well. Not so fast. According to a report from Roger Rosentreter, a retired PhD botanist who worked for the BLM for 38 years, things aren’t going so well. Dr Rosentreter submitted his report to the BLM on April 25th after attending a tour of the Soda Fire recovery area sponsored by the Society for Ecological Restoration on April 12th. The tour was attended by staff from the USGS as well as the BLM. The tour consisted of stops at three areas, the Wilson meteorological/erosion station, the Blackstock drill seeding area, and the Upper Blackstock area.

At the beginning of the report, Dr. Rosentreter states:

“Based on observations at these sites is possible that BLM caused more damage than good on the Soda fire rehabilitation. Many of these actions caused damaged forbs and biocrusts. These disturbances destabilized the soil and will encourage the colonization by invasive species including cheatgrass.”

Large areas of the Soda Fire have been replanted with Siberian and crested wheatgrass, a non-native grass species that ranchers like for its livestock forage value. It has little value as wildlife habitat and is difficult to get rid of once it has been established. In one unburned area visited by Dr. Rosentreter, the BLM had used rangeland drills to disturb the soil and plant seeds. According to Rosentreter, this area did not need rehabilitation but, unfortunately, the drills overturned the soils in the unburned area and little was growing in the newly disturbed soils. These disturbed soils are now prime habitat for cheatgrass and medusahead rye, another invasive annual grass that has gained a foothold in this area and that is just as bad for fueling fires but even less palatable for wildlife than cheatgrass.

“The BLM project personnel may not have consulted with a broad cross section of their own experienced resource personnel and, instead, relied on less ecologically knowledgeable fire, operations, and local range staff for planning this apparently ill-fated rehabilitation operation. An oversite review by BLM soil scientists, botanists and more experienced wildlife personnel could have provided valuable recommendations for adaptive management. Future review by non-agency scientists might help to improve future fire rehabilitation plans and actions. This rehabilitation did not utilize the knowledge gained from recent science on fire rehabilation nor on the vegetative needs of sage grouse.”

GR:  BLM often tries to assist ranchers without regard for the long-term stability of rangeland ecosystems.  Here’s another excellent example of the disastrous consequences.