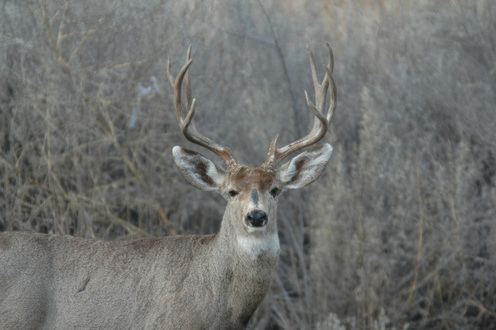 For the giant kangaroo rat, death by nature is normally swift and dramatic: a hopeless dash for safety followed by a blood-curdling squeak as their bellies are torn open by eagles, foxes, bobcats and owls.

They’re not supposed to die the way they are today — emaciated and starved, their once abundant population dwindling to near nothing on California’s sprawling Carrizo Plain about 100 miles northwest of Los Angeles, where the drought is turning hundreds of thousands of acres of grassland into desert.

Without grass, long-legged kangaroo rats can’t eat. And as they go, so go a variety of threatened animals that depend on the keystone species to live. “That whole ecosystem changes without the giant kangaroo rat,” said Justin Brasheres, an associate professor of wildlife ecology and conservation at the University of California at Berkeley.

Endangered kangaroo rats are just one falling tile in the drought’s domino effect on wildlife in the lower Western states. Large fish kills are happening in several states as waters heated by higher temperatures drain and lose oxygen. In Northern California, salmon eggs have virtually disappeared as water levels fall. Thousands of migrating birds are crowding into wetland shrunk by drought, risking the spread of disease that can cause massive die-offs.  Source: exposingthebiggame.wordpress.com

GR:  Human-caused global warming is adding another force to the mindless human destruction of a billion years of slow uncertain evolution of life on Earth.