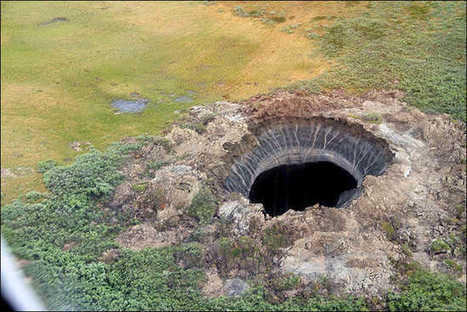 In recent years, scientists have been baffled by a number of mysterious giant holes that have formed in Siberia.

Intrigued as to what was causing this peculiar natural phenomenon, a group of scientists from the respected Trofimuk Institute of Petroleum Geology and Geophysics, in Novosibirsk, Russia, set-out on an expedition to unearth their mysteries.

The scientists, including Dr Igor Yeltsov, deputy director of the institute, conducted a range of experiments at Yamal hole, in northern Siberia – one of the biggest and most famous newly-formed craters to be found in recent years.

Prior to these experiments, scientists had not previously had the opportunity to study the cause and effect of the craters – a unique natural occurrence – in such detail.

Upon the formation of the Yamal hole – which is up to 60 metres in depth – speculation was rife amongst the media and scientific community, sparking a flurry of theories ranging from UFOs, to stray missiles, to meteorites.

But what Dr Igor and his group of scientists found was a far more distressing explanation of the natural event.  More at:  www.dailykos.com

GR:  Earlier statements attributed the craters to common seasonal melting permafrost or embedded ice rather than methane eruptions.  Eruptions are far more worrying than melting ice, because methane is a powerful green-house gas that could accelerate global warming.