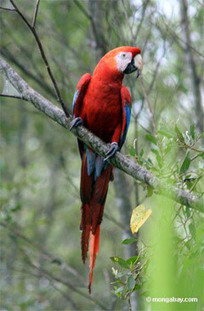 “Several species have seen their populations crash to the point of being critically endangered due to the enormous illegal extraction from the wild,” says Juan Carlos Cantu, Director of Defenders of Wildlife’s Mexico office. “If the trade is not stopped, several species will disappear from the wild in the next 10 to 20 years.”

Defenders of Wildlife documented this threat in a 2007 landmark study which found between 65,000 and 78,500 parrots are illegally trapped in the wild in Mexico every year.

While thousands of these parrots are smuggled across the border into the United States, the study uncovered that about 90 percent of illegally trapped Mexican parrots are actually destined for Mexico’s domestic market. This is a big shift from the 1980s, when smugglers illegally brought 150,000 Mexican parrots into the United States each year. With stronger laws and enforcement, that number has declined to about 9,400 parrots. At the same time, Mexico’s domestic market has expanded, with the majority of illegally caught Mexican parrots supplying domestic demand. The past 10 years has also seen an explosion in smuggling of exotic parrot species into Mexico. Currently, over 100,000 illegally enter Mexico from South and Central America annually.”  From:  news.mongabay.com

GR:  The number of parrots illegally captured each year is simply staggering.