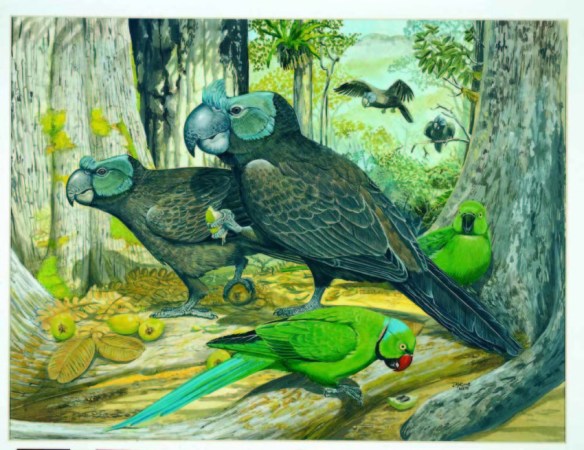 “Although Pretorius’ letter touches on the various ungulates — including cattle, goats, pigs and deer — that the Dutch brought to Mauritius, the most enlightening portions of the text describe the island’s indigenous life.

“For instance, based on other reports, Hume had previously argued that the island’s raven parrot, which became extinct in 1675, had a blackish-brown body with a blue head and possibly a red beak. But based on Pretorius’ descriptions and a re-examination of other accounts, Hume now thinks the bird was brightly colored and predominantly red. [6 Strange Species Discovered in Museums]

“Pretorius’ account also suggests the raven parrot was behaviorally flightless (it couldn’t fly well, despite having the biology to do so) and that this flaw likely led to the creature’s demise. The bird was tough and aggressive — or “very bad tempered,” as Pretorius described it — and able to fend off introduced predators such as black rats and crab-eating macaques, but only for so long, Hume said.

“The parrot’s obstinate attitude also prevented it from being transported elsewhere. “When captive, it refuses to eat,” Pretorius wrote. “It would prefer to die rather than to live in captivity.”  www.livescience.com

GR: Bad tempered and refusing to eat in captivity, the Raven Parrot sounds like an admirable bird, but it was soon erased from the Earth by humans and the invasive species they brought to the island.