GR: Scribbler is suggesting that weakening of the polar high-pressure air mass is drawing the jet stream and El Niño enriched storms farther north away from the U. S. Southwest. Thus, the three-month forecast in the map below, based on past El Niño activity, may be inaccurate. 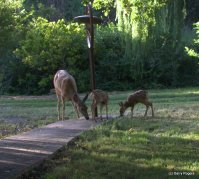 Three years ago, deer began visiting Coldwater Farm for the first time in 20 years. This might be related to drying springs in the uplands brought on by drought and the water-table-lowering wells of the homes in the foothills. A basalt dyke forces the normally belowground flow of the Agua Fria River above ground as it crosses the farm. Besides continuous year-round flow, there are several spring-fed ponds. For the past few years, homeowners have deepened their wells, and the water level in the ponds has dropped by about 10%. Last year, some precipitation softened the drought, and upland springs are flowing again. Nevertheless, the deer have remained and have increased.

Scribbler and others believe that precipitation events in February should tell us if this El Niño will break the Southwest drought, or a poleward shift of the storms will leave it intact.

Polar Amplification vs a Godzilla El Nino — Is the Pacific Storm Track Being Shoved North by Arctic Warming?

“It’s an El Niño year. One of the top three strongest El Ninos on record. The strongest by some NOAA measures. And we are certainly feeling its effects all over the world. From severe droughts in Southeast Asia, Africa, and South America, to Flooding in the Central and Eastern US, Southern Brazil, and India, these impacts, this year and last, have been extreme and wide-ranging. During recent days, Peru and Chile saw enormous ocean waves and high tides swamping coastlines. Record flooding and wave height events for some regions. All impacts related to both this powerful El Niño and the overall influence of human-forced warming by more than 1 C above 1880s temperatures on the whole of the hydrological cycle.

“Amped up by a global warming related 7 percent increase in atmospheric water vapor (and a related increase in evaporation and precipitation over the Earth’s surface), many of these El Niño related impacts have followed a roughly expected pattern (you can learn more about typical El Niño patterns and links to climate change related forcings in this excellent video by Dr Kevin Trenberth here). However, so far, some of the predicted kinds of events you’d typically see during a strong El Niño have not yet emerged. A circumstance that may also be related to the ongoing human-forced warming of the globe.”