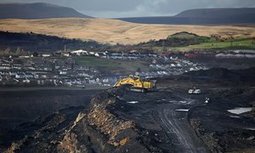 “Climate activists will use direct action to try to shut down major fossil fuel sites across the world in May, including the UK’s largest opencast coal mine in south Wales.

“The dozen international sites facing civil disobedience from the Break Free 2016 campaign span the globe from the US to Australia and South Africa to Indonesia.

“The Ffos-y-fran opencast mine, near Merthyr Tydfil in Wales, is about halfway through extracting 11m tonnes of coal. Ellie Groves, from the Reclaim the Power network, said: “The only way we can stop catastrophic climate change is taking action to keep fossil fuels in the ground.”

“The local community have battled Ffos-­y-­fran for nearly a decade and now face the threat of a new mine next door at Nant Llesg,” said Groves. “Enough is enough. We need a ban on opencast coal mining across Wales, and the rest of the UK.”  From: www.theguardian.com

GR:  Direct action by citizens is necessary when business control over government becomes so strong it blocks rational rules and enforcement.  Help stop fossil-fuel mining and use, help block military actions and the international arms trade, divest in energy, financial, and chemical stocks.  Help your government do the right thing.  Take part in protests whenever you can!