And now . . . more juice for the N. Atlantic cool pool. Thanks Robert for the information. And thanks to all the commenting climatologists for your insights and additions. Required reading.

Over the past few years, it’s become more and more clear that a human-forced heating of the Arctic has basically driven the Jet Stream mad. Big loops, omega blocks, and huge ridges and troughs have all become a feature of the new climate we’re experiencing. And related to these features have been a number of superstorms, severe droughts, ocean hot and cold pools, and extreme rainfall events. 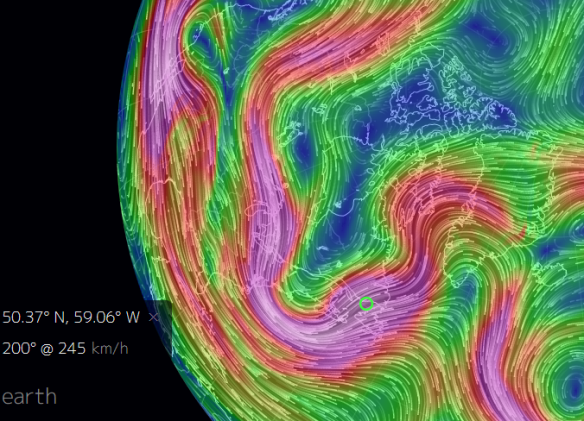 (The Jet Stream once again mangled. A strong trough shoved cool air over the US East Coast this weekend as a facing ridge prepared to hurl a bulge of extreme warmth up and over Greenland on Monday. Image source: Earth Nullschool.)

As we have  seen with Sandy, the Pacific Hot Blob, the UK floods, The California Drought, The Record Alaska and Canadian Wildfire Seasons of 2015, the Russian Heatwave and Fires of 2011, the Pakistan Floods of…