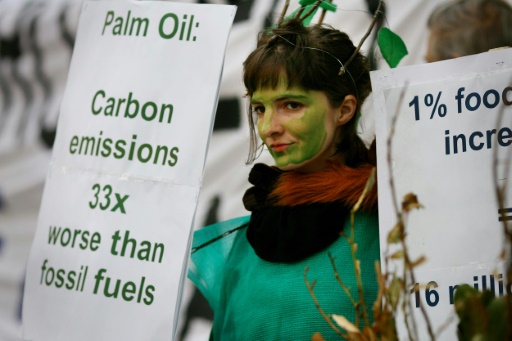 GR:  The human efforts to destroy the Earth are like the moves of a chess grand master–always catching us by surprise.

“In 2014, nearly half of the palm oil used in Europe wound up in the gas tanks of cars and trucks, according to data compiled by the EU vegetable oil industry association Fediol, and obtained by Brussels-based NGO Transport & Environment.

“Second only to rapeseed as a biofuel, overall palm oil use in EU countries jumped six-fold from 2010 to 2015, accounting for a 34 percent increase in biodiesel consumption during that period, the figures showed.

“Palm oil is also found in food, animal feed and cosmetics, but use in these sectors has dropped in Europe, in part due to pressure from environmental groups on major corporations.

“Up to now, how palm oil was distributed across products in the EU was not known.

“We now know why the industry is withholding these numbers,” said Jos Dings, executive director of Transport & Environment.”They show the ugly truth of Europe’s biofuel policy, which drives tropical deforestation, increases transport emissions, and does nothing to help European farmers,” he said in a statement.