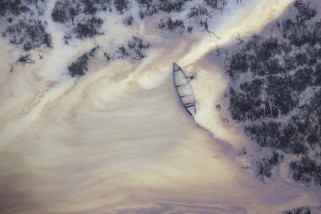 Oil is seen on the creek water’s surface near an illegal oil refinery in Ogoniland, outside Port Harcourt, in Nigeria’s Delta region. A region of Nigeria’s oil-rich southern delta suffers widespread ecological damage as spilled oil seeps into its drinking water, destroys plants and remains in the ground for decades at a time.

Fossil fuels pollute the air, the land, and the sea.

What’s been described as the most wide-ranging and long-term oil clean-up plan in history was launched in Nigeria Thursday to restore hundreds of square miles of Delta swamps ravaged by nearly sixty years of oil extraction and spills.

The move to restore Ogoniland, located in southern Nigeria and home to more than 800,000 people, comes a year and a half after Shell agreed to an $84 million settlement with residents for two massive oil spills in 2008 and 2009. By then Nigeria had asked the United Nations Environmental Program (UNEP) to study the area. UNEP released a report in 2011 noting oil impacts on Ogoniland are ongoing, widespread, and severe. In turn, Nigeria, Africa’s largest oil producer, started a $1 billion restoration plan this week to clean up decades of spills by Shell and other companies, including the state-owned company.