GR.–Climate change will destroy many beautiful places.  It’s not just a threat anymore.  The continue burning of fossil fuels to the present and into at least the near future will change the world. 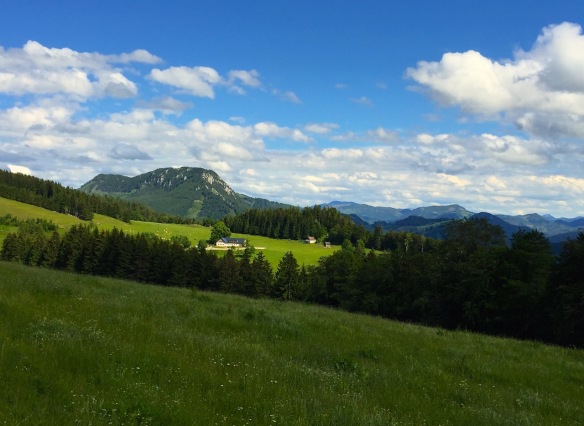 Bob Berwin.–“LOWER AUSTRIA — Austria’s high alpine pastures, called Alms, are an important part of the country’s cultural tradition. For centuries, herders have driven cattle and sheep up and down the sides of the mountains following seasonal cycles of plant growth and snow melt.

“The livestock grazing is managed mindfully to promote vegetation growth and biodiversity. It may be a difficult concept to grasp at first, but the rhythm of alpine grazing actually fosters biodiversity. Orchids, medicinal herbs and wildflowers thrive in the clearings and create lush green open patches in the landscape that are aesthetically pleasing.

“But climate change is taking a toll on Austria. The country’s average temperature has increased by 2 degrees Celsius in the past 50 years, more than twice the global average of .85 degrees Celsius, according to a 2014 climate assessment. That warming spells big changes for mountain environments, including the bucolic pastures around the Alm. For now, the cowbells still chime, but the future is uncertain.”  Continue reading:  Can the Hochbärneckalm survive global warming? | Summit County Citizens Voice

1 thought on “Can the Hochbärneckalm survive global warming?”