GR: This beautifully illustrated story gives details on a number of species being harmed by climate change. All animals must struggle to survive. Now, with human-caused global warming, their struggle is becoming more difficult. Deaths are increasing, and extinction has appeared on the horizon. Yay people!

National Geographic: “Jon Witman checks his air gauge, adjusts his flippers, and falls backward into the Pacific. Nearby, the ocean throws itself against Isla Beagle, one of a hundred-plus rocks, pinnacles, and islands that form the Galápagos archipelago, a province of Ecuador that straddles the Equator. Rebuffed, the sea retreats in a white flag of foam.

“On a shelf above the spray, blue-footed boobies dance with the awkwardness of teens at a junior high prom. Below them on the rocks, an argument breaks out between two Galápagos sea lions. The scene could have looked and sounded the same when Charles Darwin sailed here almost two centuries ago. These creatures, fine-tuned to life on harsh isles, seemingly can weather anything, even time itself.

“Suddenly Witman breaks the surface. “It’s beginning,” he tells me with a grimace.

“He grabs his video camera from the dive boat and disappears underwater again. I plunge in after him. At 15 feet below the surface, Witman points me to a lobe coral, Porites lobata. It should resemble a mustard green pagoda, but instead it glows white against the seafloor’s bubblegum pinks and AstroTurf greens. This coral is bleaching, a reaction to excessively warm water. Soon it will be dead.

“Two marine iguanas seem unfazed by the presence of one of their mummified brethren, dead likely from starvation, on Isla Fernandina. Endemic to the Galápagos, these raccoon-size lizards forage for algae along the shore; larger males dive into the ocean. The algae they eat die in warm water, rendering Darwin’s “imps of darkness” susceptible to climate change.” 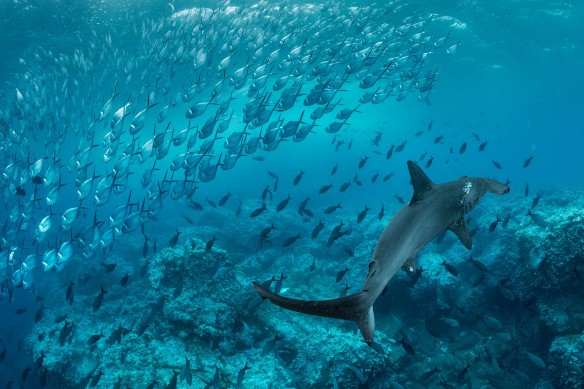 “A scalloped hammerhead cruises past a school of steel pompano, endemic to islands in the eastern tropical Pacific. Fluctuations in water temperature increase the growth of barnacles on rocks and can also cause infections, visible as white patches on this shark.” 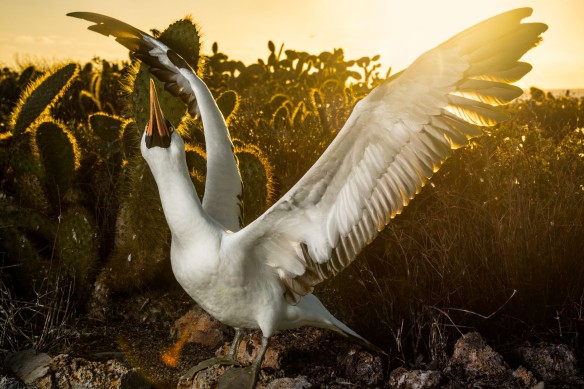 “After hunting, a Nazca booby returns to its nest near a thicket of prickly pear cacti on Isla Wolf. Scientists have been studying the birds elsewhere on the islands to gauge how long-term changes in their fish diet may hurt reproduction and depress populations.

“At spots such as Isla Beagle, Witman and his crew are on the lookout for change. They’ve had no trouble finding it. They’re taking the temperature of this seafloor community—literally and figuratively. During 2016’s El Niño, the most intense climatic event here in two decades, the temperatures at his dive spots reached a peak of 88°F. (Overall, water temperatures in the Galápagos region were more than 4°F above their long-term average.) Witman, who has explored nearshore ecosystems from Easter Island to the Gulf of Maine for 40 years, fears that this bleached coral could augur an explosion of bleaching—as well as other dramatic changes throughout the environment here—in the years to come.” –Christopher Solomon (Continue: A Warming Planet Jolts the Iconic Creatures of the Galápagos.)