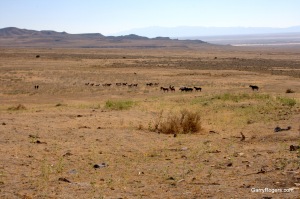 In the invasive plant literature, disturbance refers to an event that removes plants and alters the soil surface.  “Disturbance is believed to be the major factor favoring plant introductions” (Radosevich et al. 2007:  58).  Without disturbance, invasive plants would find no openings to become established and begin to spread and replace native species.

It is important to understand the nature and origin of disturbance that leads to plant invasions, because, as with global warming, it is often profitable to deny human responsibility for invasions so that a disturbance activity can continue.

Natural disturbance from floods, fires, weather events, and foraging animals are important, but most published research indicates human activities are responsible for most disturbance that open habitats to invasive plants.  Livestock grazing, roads and trails, fire, and many other human-caused disturbance are the principal reasons that invasive plants become established (Radosevich et al. 2007).

Since floods, windstorms, landslides, and fires have always occurred, some plants have evolved physical and behavioral traits that allow them to cope with and even benefit from disturbance.  We call these plants weeds.  A problem in the garden, native weeds are beneficial for like band-aids, they protect injuries.  Their rapid colonization of disturbed areas helps prevent soil erosion and preserve moisture.

There aren’t many native weed species in North American deserts, and the number declines from the cool to the hot deserts.  Prior to human introductions of foreign weeds, recolonizatiion in the hot deserts, the Sonoran and Chihuahuan, was by the shrubs and trees that were the predisturbance residents (Shreve 1964).  Hot desert recolonization is slow, and can take more than a century (Rogers and Steele 1980).

Cheatgrass, the Scourge of the Great Basin Desert, was introduced from Eurasia in the late 19th Century by ranchers and travelers.

Why are Introduced Weeds Better Colonizers?

Human conflicts with weeds probably began the first time humans began making clearings around homes or around desired plants.  Primitive gardeners might have appreciated the valuable services performed by weeds, but they probably considered them pests just as we do today.  As human populations grew and farming developed, conflicts with weeds must have increased.  Some authors have argued that the longer history of human activities in Eurasia provided time for evolution of more and more weeds that could take advantage of the human disturbances (e.g., DeWet and Harlan 1975, Radosevich and Holt 1984, Di Castri 1989, Ellstrand 2003).  It is true that most of the weeds around the world today originate in Eurasia.

I will review the principal types of disturbance in more detail in a future post.

Alpert, P., E. Bone, and C. Holzapfel.  2000.  Invasiveness, invisibility and the role of environmental stress in the spread of non-native plants.  Perspectives on Plant Ecology and Evolutionary Systematics 3:52-66.

4 thoughts on “Disturbance and Invasive Plants”